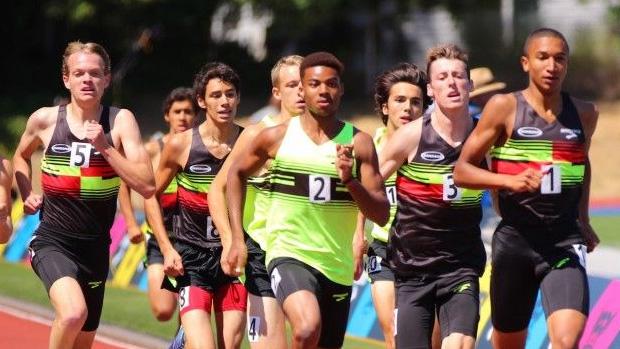 At 400 meters, Donavan Brazier had just taken the lead, but William Mayhew and Blake Yount were very much in the hunt. Photo by Travis Miller.

On a weekend where all of Colorado held their breath in hopes of a big swing that would knock a performance out of the park, that big swing never connected. There were, to be sure, plenty enough solid performances at both Brooks PR in Seattle and NBNO in Greensboro, but nary a defining moment for the athletes involved.

Haley Showalter took the NBNO Hammer Throw title at about 15 feet short of what she threw two weeks ago in Albuquerque at 178-5. Katie Rainsberger and Jordyn Colter took seconds at Brooks PR, though both came up short of personal records--Rainsberger at 4:43 and change, Colter at 2:05 and a couple pennies.

Carly Lester, bouncing back after a hamstring injury had her sidelined for state, took 8th in the NBNO 400 hurdles at 1:00.73, but you get the sense there's more there waiting to come out (and she is slated for another opportunity--more on that later). Showalter added a fifth in the NBNO discus at 153-2. Andrea Willis went 12-3 in the pole vault to finish 11th in the pole vault.

Becca Schulte and Mia Coats picked up a fourth and a sixth in the Brooks PR 400 at 54.99 and 56.64, respectively. William Mayhew fought his way to third in the Brooks PR 800 at 1:50.93, less than a quarter second off his record-setting time from state.

Nice marks, all around, but none of it the stuff of dreams.

Colter went out gamely and dictated the early pace in the 800, but when it came to a final battle with Christina Aragon coming off the final turn, it was Aragon's wheels that found another gear.

Rainsberger got caught up in a second lap that nobody wanted to lead. A 400-meter span that checked in at about 80 seconds meant nobody would go home with a PR mark, even if the final 800 was blistering fast.

Blake Yount set the boys 800 pace for most of the first lap, but when Donavan Brazier went by, Yount couldn't find an answer. Eventually, it would be Mayhew who would take on the battle for second, coming up just a whisker short at the end but still retaining a podium finish at third.