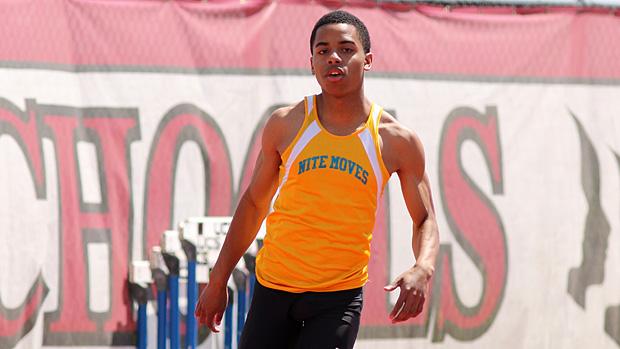 We did already know Sunday Abarca was fast, but his 48.50 400 on Sunday took things to a new level. Photo by Alan Versaw.

For some, it's the lure of finishing in the top four and advancing to the next round in El Paso. For some, it's chasing a mark that has proved elusive all spring. And for others, it's just impossible to get too much track and field.

Whatever their reasons, there was plenty of track and field action to be taken in over the past weekend here in Colorado--first in Monument, then in Aurora.

In the multis events, we saw Anna Hall absolutely dismantle the field in the 13-14 pentathlon, taking all but one of the five event titles along the way. And, if you're at all familiar with the high school career of Vista Ridge's Anthony Peters, you already had a hunch he can do a lot of things well. Peters confirmed a bunch o' hunches this past weekend, winning the 17-18 boys decathlon over notables like Zac Bitton of Greeley West and his own teammate Jake Goggin. Peters waited until the final event, the 1500 meters, to erase Bitton's nine-event lead of over 100 points. But, if you've ever seen Peters run an 800, you kind of had a clue that one was coming.

While sharpness has become an issue for many athletes now that we are deep into June, others seem still very much on top of their games. And a couple have even found a new game or two.

In any case, Lanier probably now has a new event to polish for his senior season at Regis Jesuit.

Adrian Brukner, as he has been doing the entire post season, polished off the throws with marks of 44-7, 165-0 (the second best discus throw in the state for 2015), 154-8, and 152-10. That certainly keeps some possibilities open for Brukner heading into college.

Alex Miller left us something to look forward to next year, dusting the field in the 400 hurdles by over two seconds, while Joshua Wright kept his winning streak alive in the 110s.

Sunday Abarca jumped up and stole the 400 from presumptive favorite Aaron Ragin with a 48.50 in finals. Paired with his 21.96 (-2.8) 200 title, that gave Abarca two very impressive wins for the weekend.

Hayelom Fitsum and Brock Miller dominated the 15-16 running events, though both might be a half a step or so behind the kind of times they were posting a month ago.

Among the 15-16 girls, Dawnielle Lewis more or less had things her way in the 100 and 200 prelims, only to have Maya Evans snatch away the 100 meter title in finals. Lewis did, however, secure the 200 title in finals.

Kylie Davis and Mackenzie Fidelak brooked no rivals but each other in the 100 and 400 hurdles. Since Ms. Fidelak is usually done with her race before announcers can fully ponder and execute the pronunciation of her name, I propose we simplify things and abbreviate the reference to Mack-lak. That, of course, would be pending the approval of the individual in question.

Erika Willis refound her pole vault magic and went a little over 11-5 for the win there. Evans threatened 20 feet in the long jump in the most serious, wind-legal kind of way, but came up a mere half-inch short. And, Sierra Suazo left a stamp of domination on the shot put and discus, perhaps leaving the javelin for future development.

In what would appear to be a final effort on her home track, Shayna Yon strode away with the 100 meters title, but not before Alexis Groce would at least make it interesting. Yon may have had a long jump title as well except for the reappearance of Chyna Ries (who still fits the age criterion). Ries' 20-5.75 (NWI) took that crown.

Amelia Harvey and Tarah Vijayasarathy staged a very nice triple jump battle that would eventually fall in Harvey's direction. Alexis Buckhaults had the best 100 hurdle time of the weekend at 14.89, but unfortunately parked it in prelims. Marlee Brown would be very nearly as fast in finals to take the event title. The same fate visited Damajahnee Birch in the 200, where her 24.34 was the best time of the weekend, but not the best time of finals. Alexis Groce would take the 200 title, and Birch would have to be content with her 54.75 winner in the 400.

On the futures circuit, it was hard not to notice Anna Hall and Chantae Steele. Steele prevailed in the battle down the homestretch of the 800 at a little over 2:23, but both showed up big in other events as well. Hall went 5-6 for the best girls high jump, for any age group, of the weekend. Steele went 35-5.75 for the 13-14 triple jump title but didn't get a wind reading along the way. Steele further claimed the 1500 meter crown at 5:03-and-change, but missed on the four-fer when her 58.98 400 was only good enough for second. Also of note, the runner-up to Steele in the 1500 was Isalina Colsman. The same Ms. Colsman won the 3200 in 11:00.24, suggesting she might be ready for the prime time in that event when she hits high school (but that won't be next year). 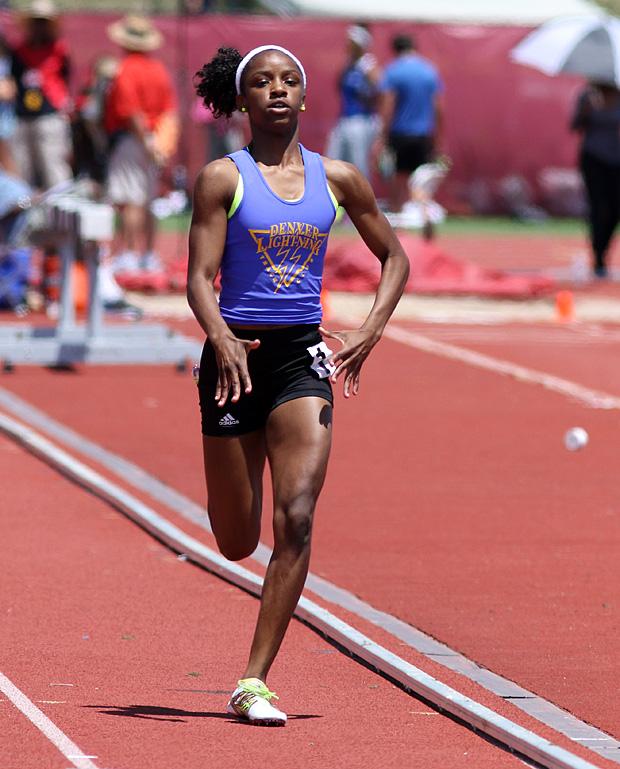 And, of course, we would be remiss not to recognize the exploits of Arria Minor. I believe, but I'm not quite certain, Minor moves on to high school next year. And, she will be taking a 24.99 200 (-1.4) with her. That should upset the order of a few things if she does arrive on the scene next spring. For good measure, Minor also took the win in the 100 by a substantial margin.

Stay tuned and be surprised.