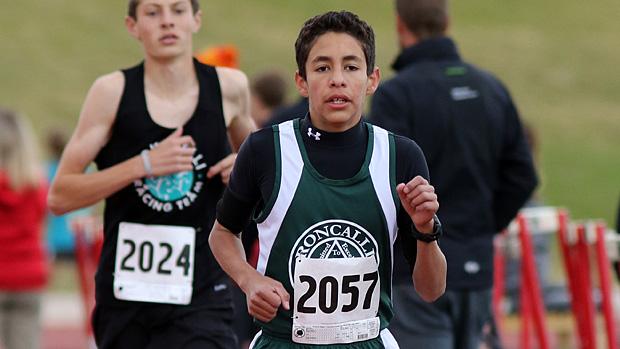 From Thursday through Saturday here in Colorado, there were two track meets and a long list of 4th of July races. So, surely we learned something, right?

Of course we did! But what?

Well, in the battle of Fairview's past versus Fairview's present, Heather Harrower got a half second's worth of the better of Zetta Mason in the 1500 at the Boulder Road Runners track meet on Thursday. Zack Kuzma and Jonathan Aziz had another nice duel in the men's 1500, but that one didn't involve any current high schoolers.

Ki Jana Phillips had very little competition, both literally and figuratively, in the sprint events of the AAU District 20 qualifier. I'm pretty sure that everyone who showed up qualified for nationals.

Most of what we learned, however, came from the road (and other surface) races on the 4th of July.

We learned that, even when you throw in the adults, Ben Butler and Allie Chipman are pretty much faster than everyone else in Highlands Ranch. Between them, they put up 106 seconds on the second-place efforts. For the record, Ben, nobody has any business running 15:24s in the summer. :-)

Cody Danley was way more than 106 seconds ahead of second all on his own at the Rocky Ford 5K.

Tabor Scholl stayed close to home and cleaned up, including men and women, at the five miles of the Winter Park Rendezvous for Independence. It took Scholl 29:23 to get that done.

Over the 4.x downhill miles of the Palmer Lake 4 Mile Fun Run, Eric Hamer made sure it wasn't fun for everyone, taking second to veteran road racer Adam Rich with a 21:25. Max Martinez was a scant 32 seconds in arrears.

At the Ourayce 10K, anything but a soft course, local favorite Nate Fedel took second in 38:43. Only ten seconds behind was Evan Graff of Montrose. Joey Fedel and Spencer LaValley made it four Colorado high schoolers in the top seven.

In the Run 4 Greeley, Levi Antuna led the high school finishers with a 17:34.

Some folks are fond of pointing out that numerous sub-4 miles have been run in Colorado.* The asterisk, however, means there's a substantial bit of downhill in those times. Former Colorado high schooler Ryan Poland paced the field with a 3:52. He might have won the Boulder 4K on the 4th, too, expect for an errant stroller on the course. Neely Gracey (nee Spence) did take the two-fer on the women's side.

But, back to current Colorado high schoolers...

At the Wiggins Freedom 5K, Kayla Young freed herself from the field by a bit over three minutes, winning in 18:02. She might be back in Wiggins in October. Riverz Flores was the top high school finisher among the men at fifth.

Incoming high schoolers Adam Maal and Emily Lucero made a major statement at the Pueblo Liberty Point 5K. Maal took third among men and Lucero second among women. We'd be optimistic about the near-term fortunes of Pueblo high school cross country except that Maal is pointed toward St. Mary's High School in Colorado Springs.

The Ft. Collins Firecracker 5K has an elite division that generally rules out high school winners, but Bryan Hird did get an 11th at 16:19, while Heather Holt finished among the top ten women at 19:46. Allysa Warling and Kacey Doner, however, stayed out of the elite division and ran faster at 19:15 and 19:17.

Matt Kline and Anna Ponzio finished out of the money at the Evergreen Freedom 5K, but did post the top high school times at 17:52 and 21:06, respectively.

So, just in case you thought everyone was taking the summer off...

And, by the way, in case you'd like to check up on certain coaches around the state, if you do a little digging, you should be able to find names such as Matt Norton, Josh Glaab, Josh Coon, and Mario Garcia among the weekend results. I'm sure there are more as well, but those names are bubbling to the surface first. Josh Glaab earns top honors here with a 1:14:14 winner in the Hu Hot Half in Colorado Springs. Clearly, Glaab left the Hu Hot dining experience until after the race.

Still looking for Cherry Days 5K results out of Paonia...