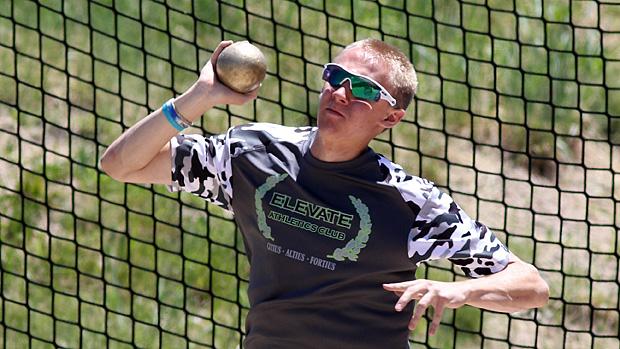 To date, not many people have seen Anthony Peters putting the shot, but it's become part of his decathlon bag of tricks, and a nice bag of tricks it is. Colorado Track XC file photo by Alan Versaw.

Evidently, Haley Showalter likes Chicago. Perhaps that's because it's so close to her chosen college destination of the University of Wisconsin for the fall. In any case, Ms. Showalter parked two implements at PR distances over the weekend.

Showalter's best discus traveled 163-4 from the ring, and her hammer came back to earth at 194-1. Not bad for a weekend's work.

Up at the Rogers River Run 5K in Longmont, the big new was on the girls side. Silver Creek senior Taylor Stinson posted a big result, getting second in the women's division with a 20:44. Incoming Centaurus freshman Brooke Calvo had a nice finish of her own at 21:26 in 4th.

If those two weren't previously on your radar screen, make that adjustment now.

The lion's share of running sports efforts for Colorado, however, took place all the way across New Mexico in the El Paso corner of Texas. I won't be able to list all of those results here, but we can touch on a few highlights.

Christian Lyon took the 100 meter dash title with a heady 10.78 (-0.6). Kent Harris and Sunday Abarca posted a fifth and a fourth, respectively, in the 200 and 400 meter dashes. Neither one, however, ventured into personally uncharted territories.

Javan Lanier won the long jump at 22-8, but couldn't talk them into a wind gauge along the runway. Nationals, perhaps?

Anthony Peters got a fourth and a sixth, respectively, in the triple jump, but where the Vista Ridge pair really stood out was in the decathlon. There, they went 1-2 at PR marks of 5541 and 5293.

Mia Moret and Abigail Gray topped out the 15-16 pole vault charts at 10-6. Sydnee Larkin had a nice long jump at 18-5.25 but wound up, like Lanier, without a wind reading. Lesha Essien's 35-4.5 took second to Heidi Beier's 36-2 in the triple jump. Sierra Suazo exercised a little domination over the shot and discus, but could not extend her reign to the javelin.

In a Colorado-dominated pole vault, Izze Calabrese scored the win at 11-5.75, followed by Kelly Chamberlain and Josie Spitz. Amelia Harvey was well in excess of three feet ahead of the triple jump field at 37-8.25 (sans wind reading).

In the 13-14 group, Abigail Tamminga had no Arria Minor to contend with and ran away with the 100 and 200 titles. Simone Watkins scored second in the 200 and took her win in the 400. Anna Hall finished third in the 800, but it's possible her legs were a little heavy after winning the high jump at 5-5 and the pentathlon at 3106.

It would appear that the second posted by David Pousma in the 11-12 boys pentathlon was the best Colorado middle school outcome.