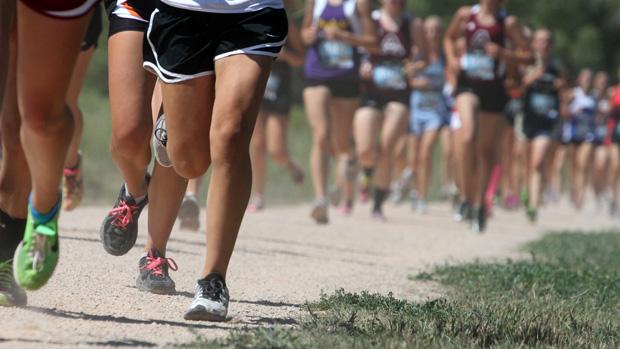 Cross country practice officially begins tomorrow. Those you'll see most of in late October, however, have been putting in the miles for several weeks now. It's been a long time since anyone won a state title on 11 weeks of work.

For teams along the Front Range and figuring on practicing in the afternoon, keep a wary eye on the sky Monday and Tuesday. Morning practices look a lot less likely to fall under the lightning axe.

I had difficulty, however, finding more prominent high school names in the weekend's road race results. For the most part, I'm guessing most coaches weren't that interested in having kids race this weekend.

We note that Springfield will be joining the 2A crowd in cross country this fall. Tim Larson is the most likely male SHS student to fill a spot on that roster, while Brenna Shettron takes most likely female status. I'm going to guess that the South Baca athletes we previously had pointed toward Lamar for cross country might well end up running at Springfield this fall. If you live in southern Baca County, Lamar is a good deal farther from home than Springfield.

In any case, it will be interesting to see how Springfield fares. They join Basalt as Colorado's representative cross country bovines. And southeastern Colorado really could use another cross country program or two. Until Springfield's entry, it was down to Lamar, La Junta, and Rocky Ford as the lone schools east of Pueblo.

For those familiar with Rick Hartley from Springfield track and field, he will be in charge of the cross country program as well.

Several scrimmage meets are slated for Saturday. D'Evelyn and Doherty will be hosting a couple of those, but there will be others. The catch, though, is that no athlete who hasn't been in practice every day from Monday through Friday will be eligible to run in those scrimmages.

The real competition begins on August 28 with a blockbuster slate of meets for the weekend. Five meets will be held up and down the Front Range on Friday afternoon, with two of those meets running shorter courses. Another two meets, both on the Western Slope get into action on Saturday.

One of those meets, the Friday Cheyenne Mountain Stampede, previews the new state meet course.

Keep in mind that, just as with scrimmage meets, no athlete may participate in these meets without five full days of official practice.

New, but frequently familiar, coaches are showing up all around the state. Micah Porter has moved to Northfield, a new school in DPS, leaving Erik Bell in charge of the boys at D'Evelyn. Craig Wagner, who has recently been at Arvada West and Standley Lake, is taking the reins at SkyView Academy. Matt Levassiur has taken over the program at Woodland Park after a year of apprenticeship in the program. Adam Rich now captains the Vanguard ship. I believe Erik Stevens has taken over now at Erie in place of recently-retired Scott Leiding.