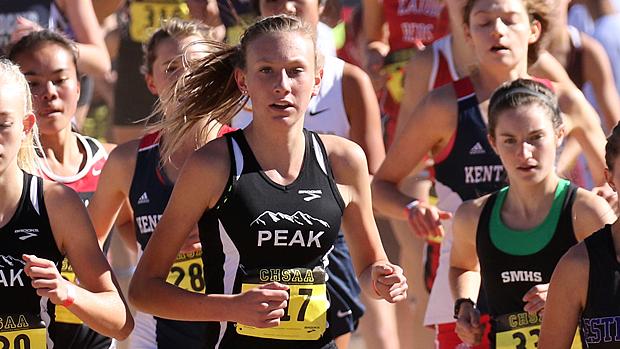 Quinn McConnell returns to competition for the first time since state cross country on Saturday. The competition won't be any easier this time around. Photo by Alan Versaw.

It seems logical that, of the weekend's two meets with high school participant, the CSM Twilight will tend to get the better of the performances.

Either USATF-Colorado was betting the Broncos wouldn't still be alive (much less playing in the early afternoon game) on January 24, or ... or I don't know what. It could be tough to find competitors, and perhaps tougher still to find officials for this one. The high school portion of the meet begins at 12:30. The Broncos kick off at 1:03. Something has to give.

But, the unfortunate convergence on Sunday does have the virtue of making Saturday's action a little more enticing.

We'll start with the boys this time...

Ryan Eddings and Javan Lanier highlight the high school entries in the 60 meter dash. Both are fully capable of lighting up the Mines Mondo for sub-7s. Brock Miller joins Eddings in the 200, and both will find the competition pretty tough in that race. Both will also have a prior event on their legs--Eddings the 60 and Miller the 400.

Normally, we would expect to see Caleb Ojennes in the 400, but the big guy from Palmer Ridge has moved his race up to 800 meters for the weekend. Who knows, if Ojennes drops a 1:52, maybe coach Christensen tells him the change is permanent? Teammate James Espinoza, a bit more seasoned in this event, also runs the 800 on Saturday.

There are high schoolers in the mile, but let's just say they have their work cut out for them in this field.

A surprising number of high school entries dot the 3000 and 5000 (that's 27 laps for the latter, folks!) fields. Liam Cox, Luc Hagen, and Andrew Rudnicki are the high school names with the greatest notoriety in the 3K. In the 5K, we'll get a little look at what Connor McCabe is made of. We've seen that before, but it's still fun to see it over and over again.

The 60 meter hurdles go to 42" at this meet, so the Elizabeth guys entered in the event have a little extra something to think about. Something similar, I presume, would apply to Brandon Oswald in the shot put.

Brandon Hinkle and Cooper Daniels extend their 2A-centric pole vault duel at this meet, but no high schoolers are found among the men's high jump entries. The long jump features Javan Lanier trying to find a jump that begins with 23.

For the girls, we have no Arria Minor listed among the entries, but Tara Pelton, Haley Rogers, and Iesha Essien will try to do some damage. And, a bit deeper in the order, there could be an entire heat of Real Training sprinters. Coach Mo, I'll send you a photo for your wall if you have them all in matching singlets. Deal?

It doesn't get any easier for the college types with Julyah Wilson, Julia Hall, Sydnee Larkin, Simone Watkins, and Pelton suiting up for the 200. Mia Coats, Watkins, and the sisters Hall headline the 400 entries.

Like Caleb Ojennes, Becca Schulte moves up a notch from her usual race to run the 800. Megan Mooney, Quinn McConnell, and Cammy Manes figure to give chase. Manes could have heavy legs from the mile, though. And, Lilliana Hamilton had a nice 800 not so long ago, so perhaps there's a nice mile coming for her this weekend.

The 3000 high school entries read like the Elizabeth and Palmer Ridge distance rosters. No high schoolers are taking on the 5000--go figure.

We won't see Emily Sloan in the 60 hurdles, but we will see Mackenzie Fidelak, Alexis Carroll, Kela Fetters, Sarah Yocum, Rhyan Pettaway, and Zoe Gilbertson. And there is absolutely nothing to feel shortchanged about with that group. You can bet Yocum is still feeling a little chafed about an FS last weekend and means to make amends.

Anna Hall and Katie McCain likely figure as the top high school high jumpers, but if it doesn't end up that way that's okay, too. Taylor Alexander makes her way over the pass as a passenger in her father's pole-vault-mobile to take a whack at winning the pole vault. Josie Spitz will be hoping to show something nice here as well.

Maya Evans, Sydnee Larkin, and Kiana Gomez have some rankings places to settle for another week in the long jump. Larkin doubles back for the triple jump.

And, no small measure of interest attends Tarynn Sieg's debut indoor performance in the shot put. Sieg pitched a 44-9 throw last spring. She has to figure 45 is in sight. It will be fun to see if reality matches vision here.

Most of the action takes place on Saturday, but a little spills over retroactively into Friday evening.

Check back Saturday evening for our CSM Twilight coverage!