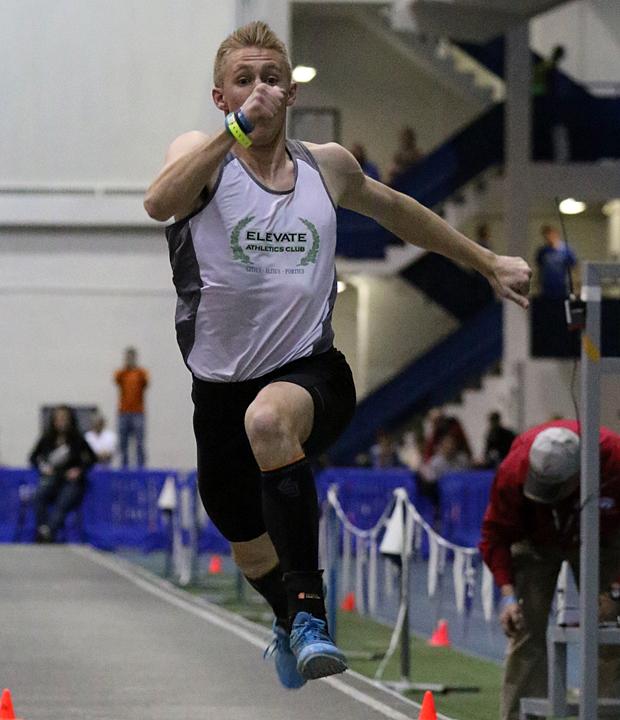 A 46-8 for Anthony Peters in the triple jump gives him Colorado's top mark on the season. Photo by Alan Versaw.

As the crowd of contestants and spectators gathered at the Cadet Field House track this morning, a bit of anxiety hung in the air. Almost to a person, meet organizers and coaches seemed resigned to the fact that this meet would go well into the evening hours. Clearly, the Air Force High School Indoor Open has been growing, but at what expense?

And then a miracle happened. Heat clicked off after heat. Event after event. It is a very short list of meets in Colorado that have ever operated at this level of efficiency.

In the end, the meet stayed on schedule, bundles of top-end performances were turned in, and everyone left enthusiastic about the experience. Flaws in the day were few and far between.

Probably the worst the day turned up was an injury to Kyle Rex in the pole vault. Rex ended up with a concussion and will, no doubt, be out of action for a little while as he recovers, but is in otherwise good condition--no broken bones nor anything more serious than a concussion. For that, a whole lot of people are thankful.

Otherwise, what we saw was what we came to see--a nearly unending sequence of very exciting events and high-end marks.

Javan Lanier battled New Mexico's Alejandro Goldston to a .01 margin of victory in the 60. But Goldston had other moments on the day--winning the long jump at 22-4.25 and the 200 at 21.81. That likely all made for a joyous trip back to Albuquerque to end the day.

Colorado saw the first sub-50 400 of the season, but we borrowed Calahan Newsome out of Amarillo, Texas, to get it done.

More local triumphs included Austin Campbell in the high jump, Alex Miller in the 60 hurdles, David Moore in the 800, Anthony Peters at a Colorado #1 mark of 46-8 in the triple jump, and a nice come-from-behind win by Cameron Dimas in the mile.

A three-way tie at the top bar in the pole vault went to Brenton Emmons on misses, but freshman Max Manson advanced his PR to 14-11 in an apparent addition to the Colorado freshman record in the pole vault. Officially, Manson went home with second place--not good enough for a watch, but plenty good enough to get watched a little more than he already is. Manson is now a little better than two feet ahead of the next freshman in the national rankings.

The mile started out looking like a personal exhibition for Laramie's Chris Henry. But, about lap three, Mason Brevig and Dimas began chipping away at Henry's lead. Eventually, Brevig would overtake Henry, then Dimas would overtake both, winning in 4:29.58. Chris Henry would come back later to win the two mile with the only time under 10 minutes.

Wyoming endured a similar fate in the girls mile. Sydney Wendt, who has won a couple of Wyoming state titles in her high school career, set a strong early pace, but was eventually reeled in by the more patient pace of Lily Tomasula-Martin. Tomasula-Martin, however, made her move a little too soon, and Wendt was able to leapfrog back into the lead, opening a substantial gap to start the sixth and final lap.

On the sixth lap, however, it was no longer Tomasula-Martin giving chase to Wendt's quickening stride. This time is was Chantae Steele. Steele caught Wendt at the top of the finish straight and opened up a two-second gap of her own for the win.

The sprints were largely Arria Minor's show. Minor ran a very controlled 60 prelim to make finals, then stepped on the gas for a 7.53 winner in finals. Toward the end of the day, Minor dropped a US #3 24.07 to take an even more convincing win in the 200.

It was not exclusively Minor's show, however. Lauren Gale left a statement of her own, winning the 400 in a US #6 time of 55.34. Becca Schulte and Heide Baron chased Gale to the finish line with 56.xx efforts.

Andrea Willis added another inch to her nation-leading pole vault mark with a 13-7.25 clearance. Younger sister Erika added another four inches to her PR with an 11-11.75 for second.

Katie Rainsberger set the national standard for the season in the 800 with a 2:11.90. She will take that mark to the Simplot Games for a probable #1 seed before switching over to the mile for New Balance Nationals Indoor in March.

Maya Evans' long jump winner of 19-5.5 didn't set a new season best mark for her, but it's tough to feel like you had a bad day at 19-and-a-half feet even so. Much the same could be said of Sydnee Larkin's winning effort of 37-6 in the triple jump. 5-3.75 proved to be the ceiling in the girls high jump, with Kiara Kearney taking that win on misses.

Emily Sloan just missed her top time of the season with an 8.43 winner in the 60 meter hurdles.