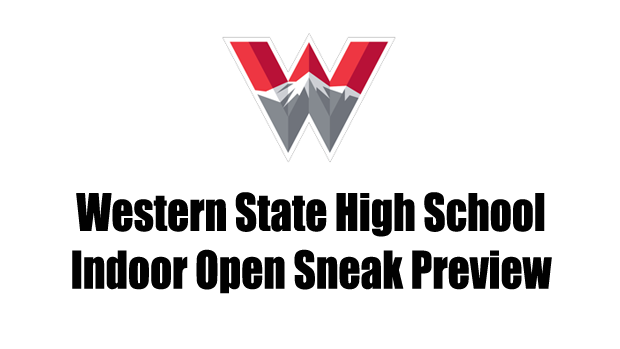 Western State alumni should be proud. Their alma mater now has a fabulous field house and now, only two years into the effort, a first-rate high school indoor meet to showcase that field house.

Athletes and individuals are coming from all over the state to be part of the second annual Western State High School Indoor Open. Schools that will be very well represented at this meet include Mountain Vista, Palmer Ridge, Broomfield, Montrose, Elizabeth, Salida, and Eagle Valley. A couple more teams may end up being very nicely represented before the lights go out on online registration at 5 PM MDT on Wednesday, February 10.

Already, some outstanding event showdowns are shaping up, even though it is clear not all registrations have made their way in yet. Expect a considerable surge of entries in the last 12 hours of registration to augment those you see below.

Gallian Roberts vs. Zaccre Kenward in the long jump is an example of just such a showdown. Other nifty examples top-tier showdowns could include Ashley Van Vleet vs. Kenzie Henderson in the high jump, Jay Shuman vs. Max Gilbertson in the 60 hurdles, and Jake Mitchem vs. Ian Meek in the 1600 (an event that could still see a few more entries).

Jordan Xiong is likely to set a meet record or two in the 60 and 200. Zoe Gilbertson figures to be a force in the 60, 200, and 60H. Cooper Daniels will be pole vaulting. McKenna Ramsay is slated for the 400 and 800, but we don't have final word yet if those will be in showshoes or spikes. Taryn Ceglowski gets to deal with more or less the full Broomfield cross country varsity in the 1600.

Katelyn Mitchem, Sydney Fesenmeyer, and Erin Tirpak are in line to be the first Colorado females to compete in an indoor steeplechase. That should make a significant memory for at least one of them.

Parker Joens will see if he can push the shot put out beyond 50 feet in the thinner air of Gunnison. A PR for Joens would require anything over 52-6.

It needs to be stated that an athlete entered in an event is not the same thing as an athlete competing in that event, but most of these should materialize. Weather does not look to be a factor for getting to Gunnison this weekend.

If someone is out there reading this, willing to take a shot at doing a little written coverage, and feels confident of their ability to come up with good indoor track and field photos, please drop me a line. I'd love to be able to put on-site coverage of this meet on the front page of Colorado Track XC.

Meet registration, while it is still open, is on Direct Athletics.