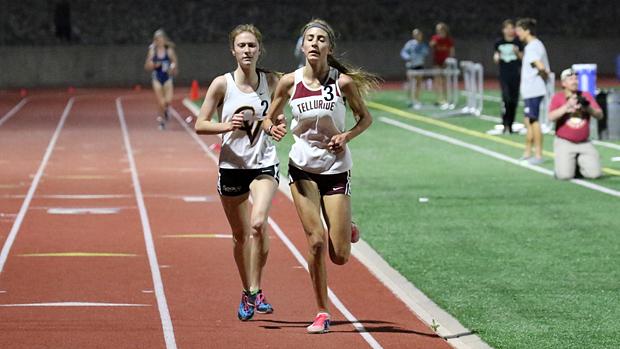 Savanna Dalton and Soleil Gaylord had the front of the girls 3200 all to themselves. Photos by Alan Versaw.

Like moths to a porch light, distance runners from points as far north as Douglas County converge on Dutch Clark Stadium for an opportunity to test themselves and, perhaps, settle an old rivalry (generally of the friendly variety) or two.

There was no old rivalry to be settled, however, in the top heat of the girls 3200. But Savanna Dalton and Soleil Gaylord made up for lost time and opportunity against each other in a hurry.

As is her fashion, Dalton charged out to a substantial early lead and threatened to make a rout of the girls 3200. Bit by bit, though, Gaylord chipped away and eventually wrested the lead from Dalton.

But, Dalton wasn't going away. The two battled almost shoulder-to-shoulder through the second half of the race, neither willing to give even a momentary advantage to the other. But, on the final lap, it was Telluride's Gaylord who summoned just a bit more from her tank. Gaylord broke free, though not by much, and ran to an 11:25-to-11:29 win.

Moments later, the top head of boys was on the track.

This time, it was Taylor Stack taking the role of Savanna Dalton, opening hard in 65 seconds, daring the field to go with him. All season long, that strategy has worked for Stack, but the competition wasn't nearly as anxious to fold to Stack's blistering pace this time around.

By lap three, Tanner Norman had taken the lead. And, after hiding out in the middle of the field for the first two laps, Cheyenne Mountain's James Jones joined Stack and Norman at the front. 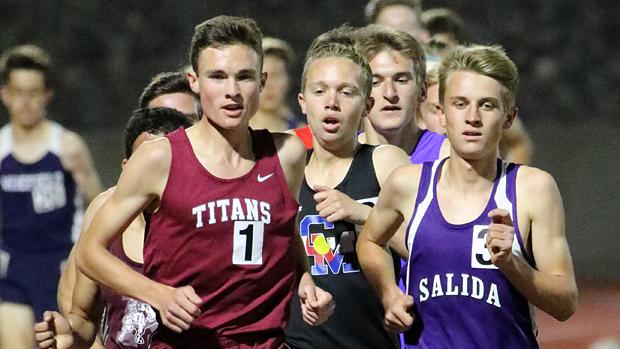 Jones refused to let Norman away. The finish straight became as close to a flat-out sprint as both could muster with 3100 hard meters on their legs, and in the last 30 meters Jones was able to gain some separation from Norman, eventually winning by a margin of just over a second at 9:21.73.

Somewhere along the way, both Jones and Norman managed to rewrite the 3200 meter line in their respective school record books. Taylor Stack took third in 9:28.81. I have half a hunch that, despite the presence of guys like Aaron Blondeau and Josh Noriega in the annals of Salida distance, Stack's mark also earns him a spot at the top of Salida history at 3200 meters.

But, the 3200s were not the sum total of the Pueblo Twilight, just the masterful finishing touches on a very solid meet, and that despite the efforts of the afternoon gusts to blow the meet into El Paso County.

Air Academy's Kayla Wiitala and Luc Hagen claimed the 1600 crowns at 5:15 and 4:23, both using stirring finishes to earn their titles.

Rampart's Josh Kavalec stunned the high jump field, winning at 6-4. Sierra Suazo pitched the shot to 41-7 for an exclamation point on that event title. TCA claimed three of five girls relay titles, including a 3:58.06 in the 4x400. CSCS's Abby Skrastins claimed triple jump honors at 35-2, despite battling tough crosswinds all afternoon. Nik Chappee left the 400 to 1A phenom Jordan Cherin, but prevailed the 100 and 200, including a 22.96 (-6.4) to win the latter. 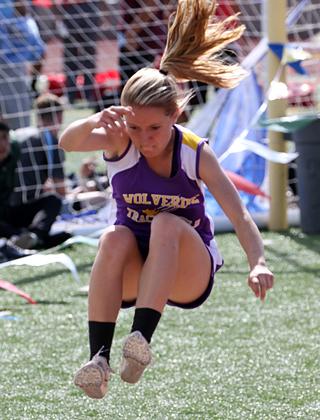 Bayfield sophomore Tymbree Florian stunned the long jump field--and perhaps herself as well--with a winning long jump of 17-5.75. All event long, Florian was finding excellent distance off the board. Suffice it to say it's probably going to take a lot more to satisfy her going forward.

Complete Results, Photos, and Video of Every Track Event