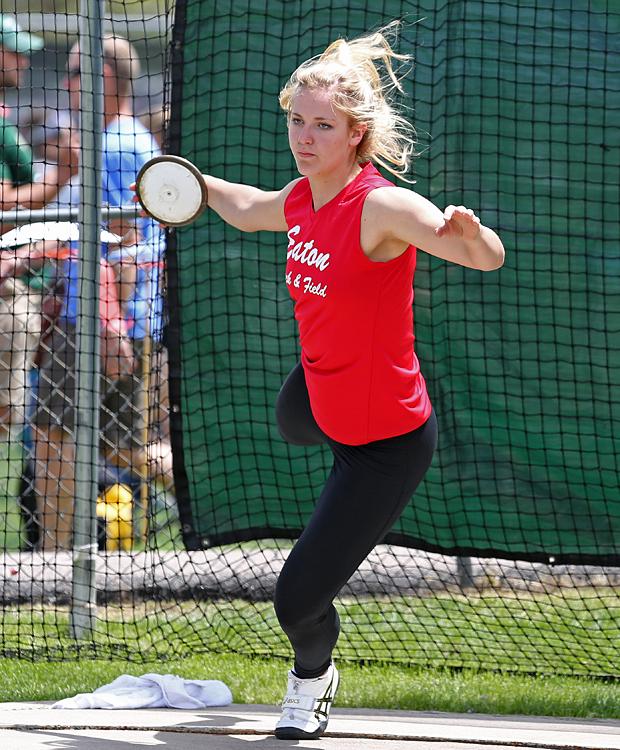 Tarynn Sieg was unstoppable in the throws, going 45-5 in the shot put and 142-10 in the discus. Photo by Jeff McCoy.

Eaton backed up their girls state title from 2015 with another one this year. And, it was not for lack of a determined effort from Moffat County that Eaton repeated.

It was more a case of Eaton's ability to keep sending fresh (that, of course, is a relative term on state meet weekend) bodies into the fray.

Every surge Moffat County mounted, Eaton answered. The red-and-black speedsuits are among the deepest teams Class 3A has ever seen, and that depth paid off big all weekend long.

Eaton scored points in large bundles, and they scored in nickels and dimes. In fact, it was the latter set of points that effectively separated them from Moffat County's challenge.

Eaton's top three-finishes, in fact, were a bit limited. Chelsey Lockey posted a third in the 400 and a second in the triple jump, Tarynn Sieg had firsts in the shot put and discus, Ana Scott tied for second in the high jump, Bailey Schumacher had a second in the pole vault, and the Reds accumulated a first and three thirds from relays. All told, those top-three finishes accounted for only 81.5 of Eaton's 107.5 points. 81.5 is still a very nice state meet total, but a few short of the 89 required to beat Moffat County.

The difference in this meet lies in Eaton's nickel-and-dimers. It lies in Alie Hodgson's fifth in the 200, Emma Willadsen's fifth in the 800, Hannah Bott's eighths in the discus and triple jump, Ana Scott's seventh in the long jump, and Caiden Rexius's sixth in the shot put. 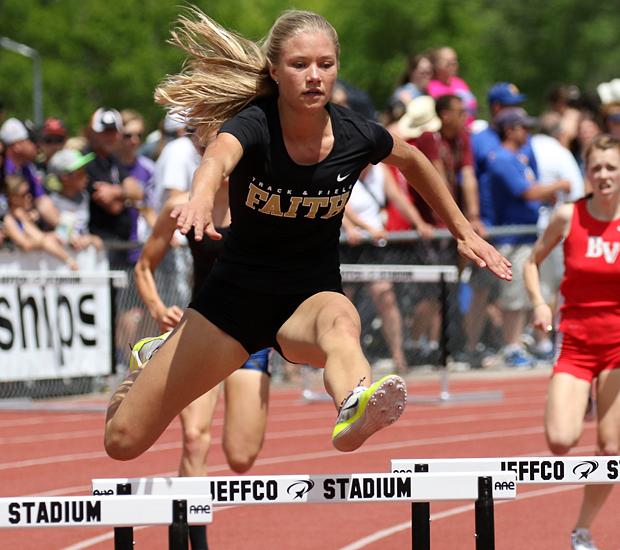 3A State meet records were relatively few, but Sieg put one record into the Eaton column when she pushed the shot put out to 45-5. She came very close to a second one in the discus, but that mark awaits another year of Sieg siege.

The only other 3A State meet records for girls came one each from Sarah Yocum (photo, above, by Alan Versaw) and Kayla Pinnt. Yocum took down the 300 hurdles records in prelims with a 42.45. By the time finals rolled around, Yocum had enough hurdles and 400 meters on her legs that another meet record wasn't in view. Perhaps she'll consider cross country this fall--and perhaps not. Pinnt earned her spot in the 3A State meet record book with 55.01 in the 400. For all of Pinnt's notorious short sprint speed, it would be the 400 (an 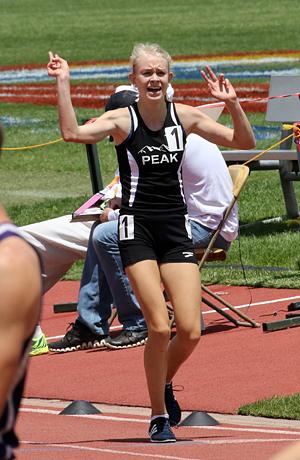 event she pretty much stayed away from until last year) that would open the door to the record books for her.

Pinnt, of course, also claimed big wins in the 100 and 200, helping Moffat County a long way toward their total of 88.

The big three of 3A distance running somehow managed to distribute the distance titles evenly among themselves. Lily Tomasula-Martin took the first win in the 3200. Quinn McConnell claimed hers in the 800 on day two. And, it was Anna Shults (photo, left, by Alan Versaw) who threw her arms into the air in victory at the end of the 1600 on day three.

Kylie Chavez scored familiar titles in the long and triple jumps but had to settle for a tie for second in the high jump where Morgan Barone finished her high school career with a win.