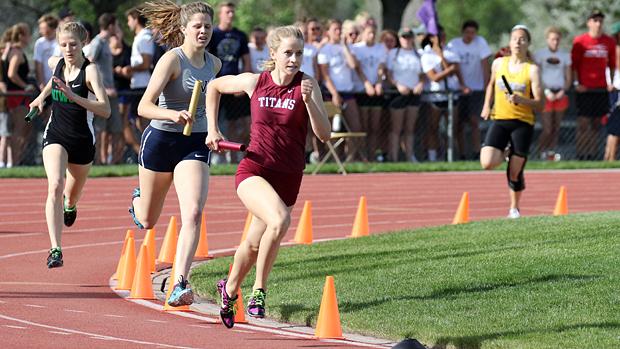 Through the first two days, and most of the third day as well, TCA built up a large cache of points, but without a first-place finish to call their own. All that came crashing down as the meet came to a close. Five TCA seniors rose to the occasion and claimed their only two event titles in the waning moments of the meet.

First, it was the expected one. Andrea Willis took a miss on her first attempt at her opening height of 12-2 in the pole vault. Two more misses and she would be done with an NH. It never got that far. Willis took the title out of her own sister's hands with a clearance at 12-2 and went on to clear a state meet record of 13-4 before bowing out on misses at 13-10.

As the pole vault was winding down the 4x400 was warming up. Four TCA seniors--Bethany Johns, Teresa Ambuul, Maggie Zielinski, and Kendra Frieden would take the track in Titan uniforms for the final time. Each were spent to the bone from a laundry list of previous events. A school record of 3:56.63 had netted them second in prelims, but the urgency of wining the event was gone--TCA went into the 4x400 with the state title clinched. Defending state champion Niwot could not overtake TCA with only one event remaining, and Air Academy had no entry in the 4x400.

Evidently, though, four sets of teeth were also clinched. Johns, Ambuul, Zielinski, and Frieden clicked off a 3:52.10 to win the title and readjust the school record--likely for the last time in a while. For her efforts, Frieden spent the next half hour dealing with exhaustion in the trainers' tent.

But, the deed was done. The Titans had won the 4A Girls crown and slapped an exclamation point on it with a blistering 4x400.

Indeed, Johns, Zielinski, and Frieden ran nothing but relays at the state meet. It's a luxury afforded to sprinters and to no other event group.

The 4x200 would have left the meet with a state meet record but for an even faster team from Valor Christian. The SMR8 team threatened the existing state meet record before ending up in second to a jaw-dropping anchor leg by Discovery Canyon's Lauren Gale. 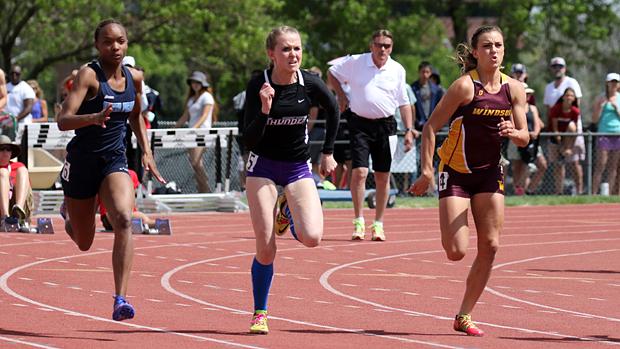 Gale wasn't the only one to come home with four event titles. Katie Rainsberger did her part on that score as well. Records eluded Rainsberger on Thursday and Friday, but she came roaring back on Friday with a 4:45.27 to put the state meet 1600 record in her name. She established the state's all-classification record earlier in the season. Rainsberger had started her run of first-place finishes on Thursday with the 4x800 and continued it through Friday with wins in the 3200 and 800. 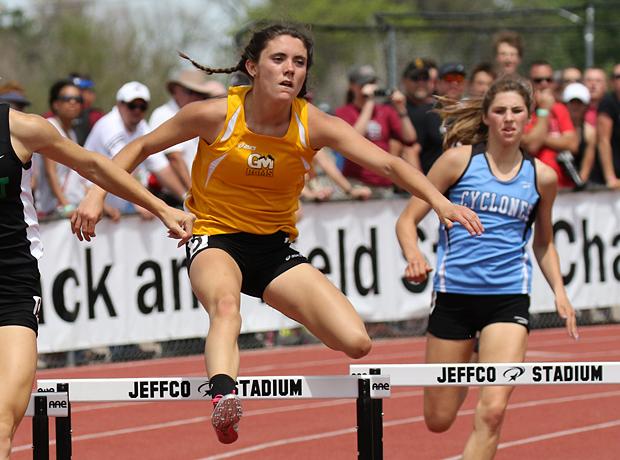 Lily Lockhart and Raquel Valdez traded firsts and seconds in the shot put and discus. Valdez won the discus at 148-6, while Lockhart took the cannonball at 41-4.25. Rylee Anderson claimed the high jump tiara at 5-7. Maya Evans and Alex Hellenberg wrapped up the horizontal jump titles. Alexis Buckhaults and Bailey Sharon (photo, above) found their way to hurdle titles, Buckhaults by leading wire-to-wire, and Sharon by passing Niwot's Kela Fetters over the final barriers.