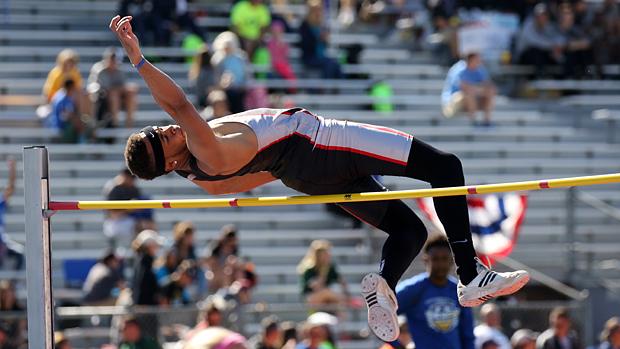 Danny Williams opened his state meet with a tie for fifth in the high jump. It got better from there. Photo by Alan Versaw.

Of all the outcomes at this year's state meet, none registers bigger on my personal shock-o-meter than Pomona's 5A title. Evidently, there was a remaining collective chip on the shoulder of this team after coming oh-so-close to winning a state football title in the fall. Or, maybe it was a matter of being a little ticked off at being overlooked as state drew near.

If you know anything about the Pomona program, you know throws are big in Jeff Donnel's program. It's not all about throws, but it is definitely about throws. So, we'll start there.

Brandon Micale came up big in the discus, delivering a 148-7 for fourth place. Amazingly, Clae Walters didn't finish among the discus points, but he was part of a big showing in the shot put. There, Jake Moretti went 54-10 for the win, while Isaac Lopez and Walters took sixth and seventh, both a little over 49 feet.

All in all, it was a decent showing for the Pomona throwers, but not nearly enough to win a state title. For clues to the rest of the picture, we stop first at the jumps.

Danny Williams enjoyed a state meet for the ages. Williams got 4.5 points in a tie for fifth in the high jump. But, his horizontal jumps came through in an enormous way, getting a second at 22-9.5 in the long jump and winning the triple jump at 47-3. That mark doubled as the best 5A mark of the season. 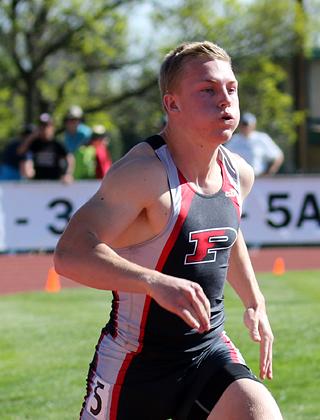 Nice, but still not enough to win a state title. So we move next to the sprints.

In the sprints, a combined 21 points from Max Borghi and Jeremy Gonzales kept the Panther faithful on their feet all through the meet. Better still were a win in the 4x100 and a second in the 4x200. And, suddenly this team is starting to have the look and swagger of a state champion.

But, we're not done yet.

Ryan Marquez added seven big points in the 300 hurdles. Vincent Workman got three more in the final distance event of the weekend on Saturday. Both Workman's and Marquez's points helped to finalize the Pomona triumph.

And, amazingly, some of that momentum spilled over into Sunday. Apparently not getting enough distance work in the season, Workman went out and dominated a local 5K in 16:23.

The closest anyone could come to Pomona's 94.5 points was Fountain-Fort Carson with 79. In short, this one really wasn't even very close. Pomona wasn't taking prisoners.

Fountain-Fort Carson, of course, was riding the Christian Lyon Express. Lyon won the 100 in 10.80 (-1.7) and the 200 in 21.67 (-3.6). Lyon also anchored two winning relays. Malic Bonner's 48.95 was good enough for third in a 400 won by Hinkley's Darrien Wells in 48.05. Wells' win may have caught more of the crowd off guard than Pomona's team title, but it's difficult to say in advance exactly which teams and exactly which athletes will come up big at state.

Henry Raymond is one of those who came up big, but his was more of the expected variety. Raymond ran 1:51.97, 4:18.67, and 9:25.21 for his distance triple crown. Suddenly, the distance triple crown is becoming somewhat of a thing in 5A boys. You can nominate now for whomever you expect to pull it off next. 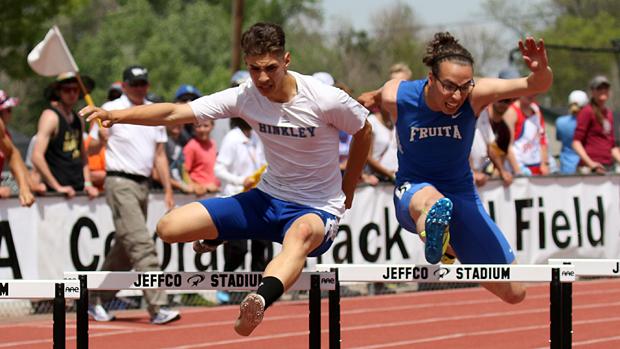 Thomas Robillard and Angel Heredia (photo, above) were two not-very-surprising winners in the 110 and 300 hurdles, respectively. Austin Campbell won the high jump and Jacob Condill the discus, to round out the event winners not previously mentioned in earlier articles.