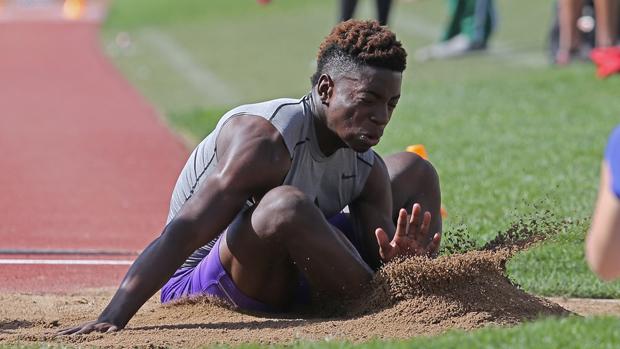 Indeed, from that moment forward, the Mountain View boys seemed to find the one additional element they needed to win a state title. They made Coach Clark's farewell season a journey to store up in his memory for as long as he lives.

While fellow contending teams Palmer Ridge and The Classical Academy coughed and sputtered at points (and also surged at points), the Mountain Lions barely missed a beat throughout the state meet. In any given state meet, there is a remarkable number of things that can go wrong. Any coach who has been around a while knows all about that. This time around, however, things held together remarkably well. And, where Mountain View failed to meet expectations it was, as often as not, a case of exceeding expectations.

Jordan Kress climbed seven places over his seed in the 100 meters to claim third place. A seventh for Kress in the 200 also exceeded his seed mark.

Mountain View wisely set a very competitive 400 aside and invested in other events. One thing that helped accomplish was a move from 10th seed to fifth place in the 4x800. Ryan Vomacka added an eighth in a shockingly fast 800 field.

Nolan Kembel emerged out of the hurdles with a fourth and a fifth. The net effect there was to meet expectations as based on seed times.

It isn't necessarily easy to meet expectations when you're seeded second in three relays, but the Mountain View 4x100, 4x200, and 4x400 accomplished almost exactly that, finishing with two seconds and a third. Ramon Salgado and Brenton Emmons came out of the pole vault, a fickle event to begin with, with a 1-2 finish. That exceeded seeds by one place, gaining back--if you will--the point lost to seed expectations in the relays.

Logan Stewart held a very important #1 seed in the long jump, winning with a mark of 22-11.

It was a complete state meet for Kevin Clark's crew. They earned what they finished with in every sense of the word. 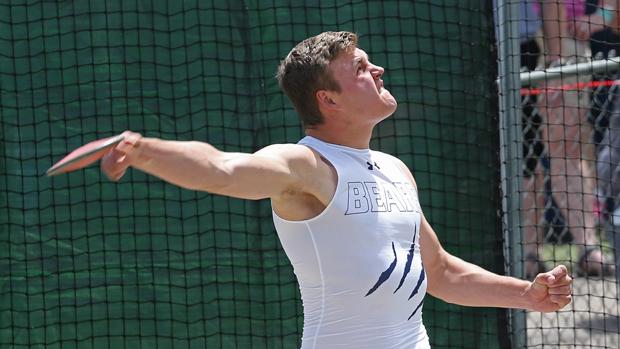 Palmer Ridge, though ultimately unable to keep pace with Mountain View, was not without a few highlights of their own. Caleb Ojennes--in his last meet wearing one of about a dozen different Palmer Ridge uniforms--won the 200 with a hard late surge and won the 400 in a 4A meet record time of 46.71. George Silvanic (photo, above, by Jeff McCoy) stunned the field at the discus ring with a winning toss of 158-7. Less than two feet separated the top six places in the discus on Saturday, so every inch of Silvanic's throw counted. And, of course, Palmer Ridge produced yet another dominating 4x400, although that cross country thing did come around again earlier in the 4x800. Durango left Palmer Ridge in second in what looked like a relatively safe event for the Bears.

The triple jump and high jump produced the expected winners in Anthony Peters and Jacob Bejarano. Conor Bertles was on the short list of possibilities but not quite an expected winner in the shot put. 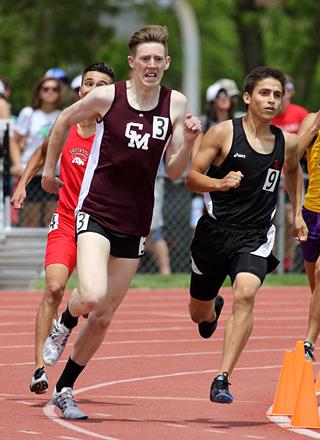 Longmont's seniors went out with a double hurrah, claiming both the 4x100 and 4x200 titles. It could be a while before Coach Akers sees a group with that kind of wheels again.

Jay Shuman and Aaron McCoy claimed the 110 and 300 hurdles titles, respectively. McCoy dipped into the 37s for his win.

A great finish between David Moenning and Thomas Staines in the 800 (photo, left, by Alan Versaw) went the direction of Moenning. Montrose's Ian Meek showed uncanny speed on the final lap of both the 3200 and 1600 to claim both of those titles. Figure that Meek comes back for more next year.

Junior Will Domier claimed the 100 meter crown for 3A-bound Holy Family. With graduating their top sprinters, that makes a place for Domier on the short list of 3A sprint favorites for next spring.