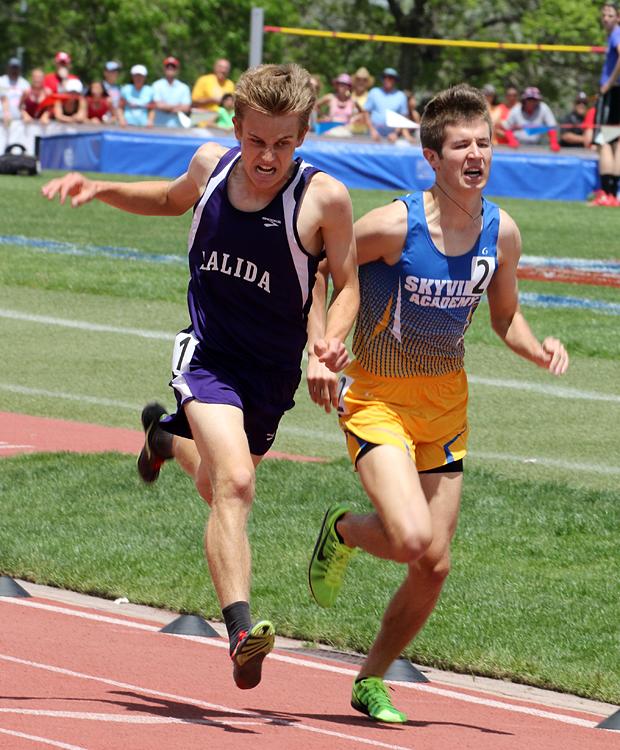 With less than five meters to go, the 3A Boys 1600 was still unresolved. Photos by Alan Versaw.

If you've been around 3A distance for a while, you've seen Ben Butler and Taylor Stack race against each other a few times.

Up until Saturday, Ben Butler had won all but one of the head-to-head meetings between the two. Most significantly, Butler beat Stack both of the last two years at state cross country. Butler buried Stack at state track last year, in both the 1600 and 3200. Butler ran away from Stack at this year's state 3200 on Thursday.

The lifetime series was listing strongly in the direction of Butler as the two stepped onto the track for one final high school meeting at high noon on Saturday.

For three-and-three-quarter laps they went around the track at a breakneck pace. They were so far ahead of the pack, there was no dust to breathe--it had all settled by the time the field caught up with where the pair had been.

And, at the top of the final straight it was more or less a dead heat. 1500 meters of no advantage gained by either runner. And, that could mean only one thing--a dead sprint (or as close to that as they could replicate after 1500 hard meters) to the finish.

This time, the story wrote a different ending. With arms flailing a bit at the end, Stack just outleaned Butler at the finish to take the win, 4:21.43 to 4:21.44. It was, in all probability, the most stirring finish a 3A distance race has ever seen.

You can listen to Taylor Stack's post-race thoughts here. As has happened so many times and in so many places, two closely-matched rivals have made each other a lot better.

And, honestly, nothing else about the 3A Boys state meet was remotely close to being that dramatic. The high jump (see below) was dramatic, but not nearly as much so, nor with as much history, as the 1600. 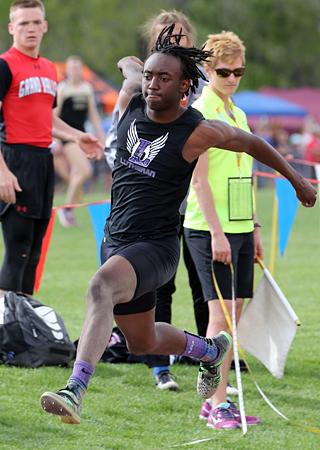 The team title was decided, practically and mathematically, very early in the meet. Lutheran brought their Lions and, as cats are wont to do, they played with the field. Eventually, they would total 137 points.

Lutheran won eight of 18 events, and added a couple of seconds and thirds to that pile of conquests. Taking wins were Kent Harris in the 100 and 200, Matt Hanson in the 100 hurldes, Kharon Hall in the triple jump, Jacob Dack in the shot put, Adam Dawson in the discus, plus the 4x100 and 4x200 relays. While they did that without posting any new meet records, Hall did end up with the top triple jump mark of the season for all classifications with a 48-1.75 (0.0).

Both throwers and Arkell come back next year, though the rest have finished their high school careers, no doubt to some relief of the rest of the 3A ranks.

Platte Valley did their level best to keep pace, but--as suggested previously--it was more of a battle for second than a battle for first.

Parker Joens, arguably the best all-around thrower in 3A, took second in both the shot and disc. Dane Corliss took second in the 110 hurdles. That was as close as Platte Valley came to an individual title. Still, the Broncos managed to pile up 65 points.

Manitou Springs got great mileage out of junior Jared Keul. Keul got second in the 400 with what would have been a 3A meet record except for Sunday Abarca's 48.54. Keul won the 800 in 1:55.70, and he also anchored the Mustangs' winning 4x400 relay.

Gallian Roberts went over 22 feet (though not wind legal) to win the long jump. Where wind doesn't matter, Roberts ran 39.08 to win the 300 hurdles. Like Taylor Stack, Roberts graduates this spring, and Salida faces a monumental rebuilding task next spring. 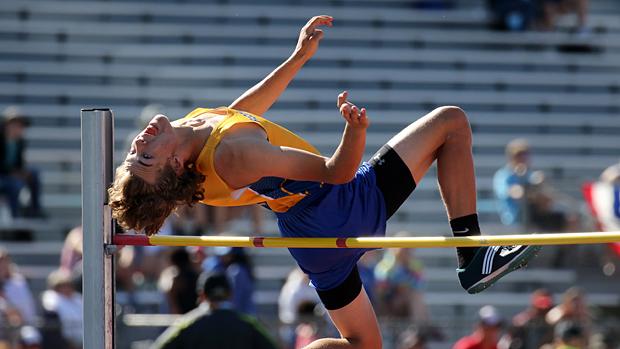 Alamosa parlayed the strength of their distance program into a 4x800 victory. Sterling's Victor Zimmerman took the pole vault title that he was a heavy favorite to win. Roaring Fork's Jasper Germain (photo, above) surprised some folks by taking the high jump title on misses over Ryan Goldhammer at 6-5.