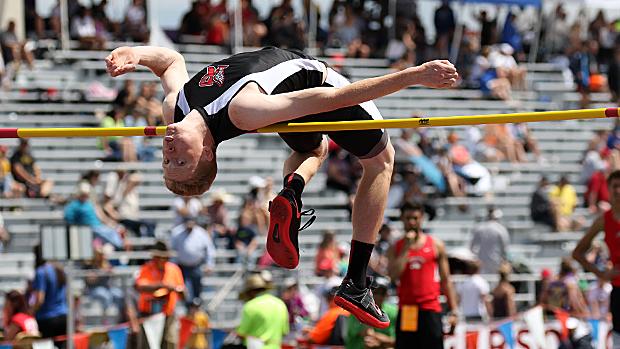 Jacob Bejarano has been close, but has never won a state pentathlon title. Is this year the year? Photo by Alan Versaw.

A quick glance at the entries suggests that your favorites this year just might be Jacob Bejarano of Roosevelt and Heather Betz of Fairview.

Fairview has a strong tradition at this meet, with recent Fairview winners including Heather Harrower and Calvin Munson.

Becca Schulte won last year's girls competition, but the proximity of Great Southwest this year appears to be keeping her out of this year's pentathlon meet. So, the field is wide open. Heather Betz was last year's runner-up and brings intimidating high jump and hurdle marks into this year's competition.

Jacob Bejarano was a serious contender last year and only figures as more so this year. Two other top finishers from last year, Ryan Vomacka and Kyle Rex, are not among this year's entries.

Three who figure to push Bejarano for the title include Angel Heredia and Darrien Wells of Aurora Hinkley, plus Patrick Scoggins of Rangely. Heather Betz can look to the likes of Highland's Maison Tolle as a chief source of competition. But, as a couple of athletes learned last year, taking zero points in an event is a very real possibility in a multis meet and a sure end to any kind of title competition.

Results will be posted here as they become available.