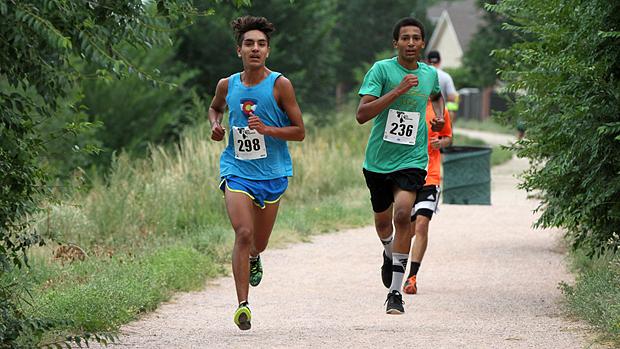 Max Martinez and Ryan Outler hammering out a steady pace with one mile to go. Photos by Alan Versaw.

For several years now, Erik Nelson's Widefield Gladiators have welcomed the first Saturday in August with a demonstration of force.

They just did it again.

The race title (more on that later) didn't go to a Gladiator, but a whole lot of places behind it did. Cole Munoz scored a second in an eyebrow-raising time of 16:35. Three places later, it was Max Martinez, followed in close order by Ryan Outler.

"Wait a minute," you protest, "what was Martinez doing in fifth, and who is Ryan Outler?!" Great questions, both. 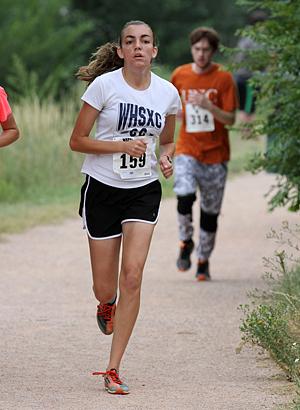 It would appear Martinez was pacing Outler and not racing for first place. And, if today was any indication, Ryan Outler just might turn out to be the answer to the question of who the fifth scorer will be for Widefield this fall. Only, he might possibly end up scoring a little high than fifth. George Arciniega added a 15th-place finish for the Widefield crew.

Breaking up the lead pack of Widefield was Jacob Dewey of Rampart High School in 16:39.

Over on the girls side, Tabitha Frandsen, also of Widefield, was the top high school finisher in 22:20. Hope Stark, a Colorado Springs middle school competitor, had a second-place finish in 20:45.

Even the overall winner of the race had a high school connection. Adam Rich, who ran 15:46, coaches the Vanguard cross country team.