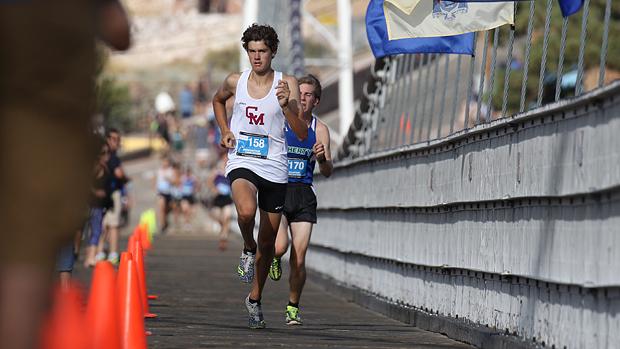 Thomas Chaston held off a determined challenge from Doherty's Hayden Martinez all the way across the Royal Gorge bridge. Photo by Alan Versaw.
RESULTS   |   PHOTOS

For the uninitiated (which I was until yesterday afternoon), the Canon City Cross Country Invitational is an exercise in hill work--both up and down. The first 1.3 miles climbs roughly 200 feet to an abrupt turnaround along a dirt road. The next 1.3 miles takes the competitors over the same route, only downhill this time. The final half mile takes a steeper decline to the bridge, where the course goes slightly uphill over the suspension bridge with wooden planks the only thing between the runners and an uninterrupted plunge into the chasm.

If you stop at the right places on the bridge, you can peer down through the gaps in the planks to the Arkansas River, roughly 1000 feet below. For a few runners, the fact takes some getting used to, but it turns out that nobody has time to peer down between the planks as they're finishing a race. So, it all ends up, even if the build-up is a little daunting.

READ: Top Moments of the Meet

VIEW: Photos of the Meet

LOOK AHEAD: What's next?