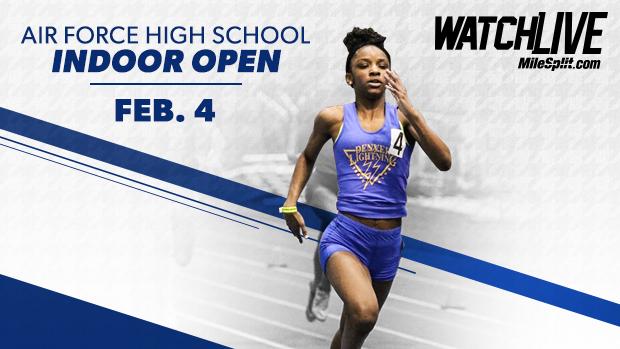 The problem with previewing some highlighted events for the Air Force High School Open lies mostly in deciding which events to highlight. Almost every event has some sort of appeal that extends well beyond your ordinary meet.

So, here's your selection of a few of the very best (and note that these previews don't include any potential walk-up athletes on Saturday):

Girls 200: You know all about Arria Minor. But who you probably don't know about is 14-year-old phenom Kyairra Reigh. Reigh runs with the same Denver Lightning as Minor but has been relegated to the 13-14 age group in USATF meets. Reigh comes into this event with a 24.75 seed. Reigh, incidentally, also owns the top seed in the 400.

Boys 400: Between Brock Miller, Nolan Kembel, and Isaiah LaPioli, I'm confident we have a very good shot at witnessing our first sub-50 time of the season.

Boys 800: Yanique Borne owns the top time of the indoor season at 1:59.10. But, Mr. Borne gets to chafe a little under the fact that there are four people seeded ahead of him, presumably using outdoor marks from last track season. Look for Ben Kelley, Carter Dillon, Hayelom Fitsum, and Dylan Ko to mix it up with Borne for a very interesting race. And, just for fun, Wyoming is bringing down a 1:59.20 type in Preston Gomer.

Girls Mile: Maria Mettler takes in the top seed. And she will be tough to beat. But, the field is solid and Mettler hasn't raced a mile in a while. Look for serious challenges from Wyoming's Molly Olsen and more local contenders like Hannah McReavy, Sarah O'Sullivan, Sydney Teslow, and Jenna Fitzsimmons. Watch out for Taryn Ceglowski, who won't be seeded as high as some others, but who has already been doing some racing this winter.

Girls Two Mile: This will be your first chance to see Brie Oakley since NXN. Is there any rust in the wheel bearings? Would we notice if there was? Alayna Szuch takes her turn at chasing Oakley.

Boys Triple Jump: Jequan Hogan has been handling the competition pretty handily so far this season, but things get a little tougher this time around. Hogan nows gets to try to fend off challenges from Gift Chinda, Aaron Harris, Zaccre Kenward, and William Nolan out of Wyoming. We haven't seen anything out beyond 47 feet this season, but it seems very likely someone busts through that barrier on Saturday. Winning might require it.

Boys Shot Put: A pair of well-over-50-footers come together in Cody Allen of Wyoming and Andy Kline. And, there are four more guys coming down out of Wyoming who've gone beyond 46 feet. Those primal screams you hear may signal some very big marks.

Girls Shot Put: Jordan Fink of Wyoming takes on a few of Colorado's big guns in the form of Tarynn Sieg, Emma Dern, and Sierra Suazo.

Girls Long Jump: What's not to like about Audra Koopman and Maya Evans taking turns on the runway? Koopman is an ever-present threat to hit 19. Evans is the #2 ranked long jumper in the nation, with several 20+ leaps to her credit.

Boys 60 Hurdles: Laramie's McCade Johnson and Kyler Freeman come down to add a little strength to the front of the field for this race and push the Colorado hurdlers perhaps a bit more than they've been pushed to date this season.