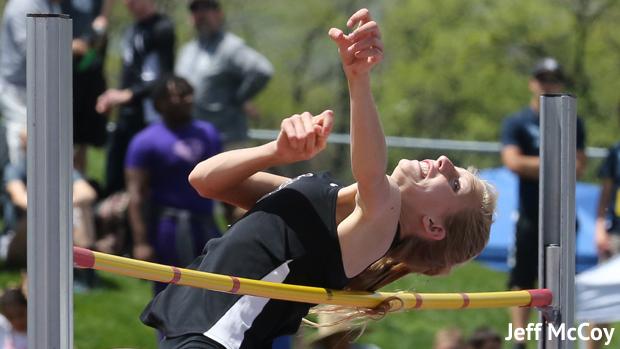 If Rylee Anderson improves as much this year as she did last, she might become 4A's newest classification record holder.

First, you might want to take a quick look at the existing 4A record board to get an idea of what I mean. That will give you a nice snapshot of the lay of the land.

Lots of 4A records are theoretically within reach, but very few appear to be on the cusp of falling this spring. Those that do have a relatively good chance at falling appear to be limited to these:

Anderson, the Silver Creek junior, jumped 5-8 at the Colorado Meet of Champions last spring, and then 5-7 to win the 4A state title. That's certainly good enough to put her within striking distance of the 4A state meet and classification records. The state meet record is owned by Skyline's Jill Fadenrecht at 5-8.25 and dates back all the way to 1999. If Anderson breaks that record, it will have the distinction of moving the record across town. The all-time classification record belongs to Lewis-Palmer's Amy Bladow at 5-10. That one seems to be a bit more of a reach, but not entirely out of sight.

Valor already owns both of these records, so the records aren't likely to travel very far even if they are broken. The 4x100 record dates back to the days of MaryBeth Sant in 2013, and nobody is left from that record-breaking relay. The 4x200 record, however, dates back only as far as last year with two members of that relay team potentially back in the fold this year. I say "potentially" because I'm not sure yet that we'll be seeing Tess Boade on the track this spring. She has a pretty promising soccer career ahead of her and that could possibly preclude running track this spring. If Boade isn't part of the Valor sprint crew this spring, record hopes might have to wait for another year. If she is back, and with the sprint work Brian Kula has been busy doing with this crew, the short sprint relay records could be vulnerable.

As records go, Zac McCoy's 21.05 doesn't seem to be in immediate danger, but Nik Chappee (21.27 last spring) is close enough that it's worth thinking about. Adding to the intrigue with this one is that I believe Aaron McCoy of Canon City is Zac McCoy's younger brother. Aaron would appear to be next in line behind Chappee to take a crack at the record. And, Air Academy and Canon City figure to see each other at least a couple of times during the season. Perhaps this one becomes very interesting before the season is done.

Honestly, I'm simply not seeing anything else--at least for the moment--that appears to be lining up for a serious shot at a new classification record this spring. That, of course, could change with new information forthcoming from meets as the season develops. For now, though, almost all 4A classification records look to be good for another year.