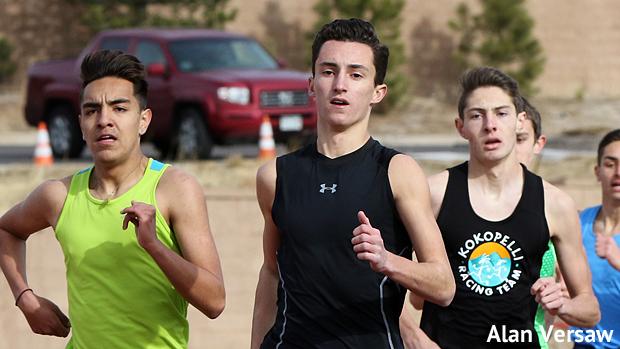 There were three rankings meets, and probably a few more JV meets we mostly don't know about, on yesterday's docket. None of the three were very large as rankings meets go and several varsity regulars for the attending teams sat these meets out, but it's still always worth taking the time to look at the results and see what they tell us.

For this meet, we'll start at the north end and work our way south.

In this case, that means starting in Berthoud with a very local meet called the Spartan Spike Invitational. You had to be from Loveland or Berthoud to be there.

Make a mental note about Berthoud freshman Alyssa Bailey. She went 16-1.25 (wind legal) in the long jump for the win.

Ryan Dewald of Resurrection Christian won the boys shot in 41-3, but it's a rough year in the 3A boys shot, meaning Mr. Dewald needs to keep stepping up those performances.

At Jeffco Stadium, it was the Jeffco Qualifier #1.

Chatfield's Drew Johnson dropped a 4:33.03 to win the 1600. And that suddenly makes Drew Johnson a name of interest in the 5A 1600. He beat a couple of noteworthies with that effort.

The Columbine tandem of Ted Mullin and Mateo Rodriguez posted a very nice pair of 200s. Columbine has not been much of a sprint powerhouse lately, but that may be about to change.

It's been a little over a year now since Weston Donati-Leach ran an outdoor 800 and took two minutes to do it.

Not as much from the girls results stands out in an immediate sort of way, but I'll go with Joey Stenson's 111-10 in the discus as the mark of the meet on the girls side.

On the south side of the Denver metro area, it was the City of Ft. Collins vs. the City of Littleton. Despite the name of the meet, I'm not really certain there are a whole lot of bragging rights at stake in this one. It's mostly a small-meet kind of opportunity for a lot of kids to see some action with FAT and wind gauges these days.

CITY OF VS. CITY OF RESULTS

Sid Bennett got the expected win in the boys pole vault at 13-0. Andy Kline dominated the boys throws. And Blayne Lincoln served notice of bigger things to come in the 300 hurdles with a winning mark of 40.85.

Over on the girls side, Tate Thornton had a 100H, PV, and TJ triple crown. I don't have any particular insights into the head of Ms. Thornton, but I'm guessing all of the marks in involved were rather satisfying, for the moment. The 15.39 in the 100H was a PR.

Lauren Gregory ran an event and won, but probably not the event you would have expected. Gregory just missed going under a minute for 400 meters. I'm guessing she ran the 4x400 as well, and Fort Collins just missed posting the first sub-4 of the season in that event.

Doubling up on event titles were Audra Koopman and Hannah Carlson.