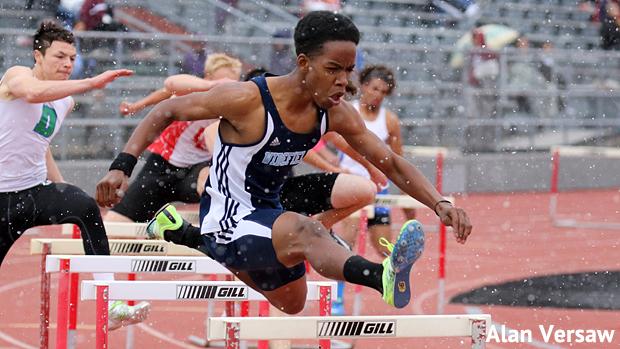 There were moments, like during heat 7 of the boys 300 hurdles, when it appeared the weather might cut the meet short.

You could argue the 2017 Coronado Cougar Classic didn't quite make it all in before the weather, but it's not as if the weather won and the meet lost. The meet won. And that's the case even if a few athletes left early.

Friday, April 28, covered almost the entire gamut of spring weather at Garry Berry Stadium. The morning broke clear, but with puddles of water that had turned to ice overnight in the field event areas.

Until about 11 AM, it just kept getting warmer and warmer, with temperatures rising smartly above the forecasted high of 49F. Athletes and coaches were shedding layers like snakes shed skin. People were actually reciting praises of the weather, knowing full well the tables would soon be turning.

And then the clouds started appearing--east, west, north, and south. It was a coordinated effort.

As the clouds rolled in, the temperatures rolled down. And, the rolling schedule ground to a snail's pace as every new heat was accompanied with athletes shedding layers down to competition level.

By about 3 PM, things were getting seriously chilly but then came the change that likely saved the meet. Mercifully, the wind died. Died to almost nothing. The remaining two hours of the meet would be held with only intermittent light breezes, and a few of the best performances of the day came in the lull before the Saturday storm.

Click on Next to move through to top stories of the meet.