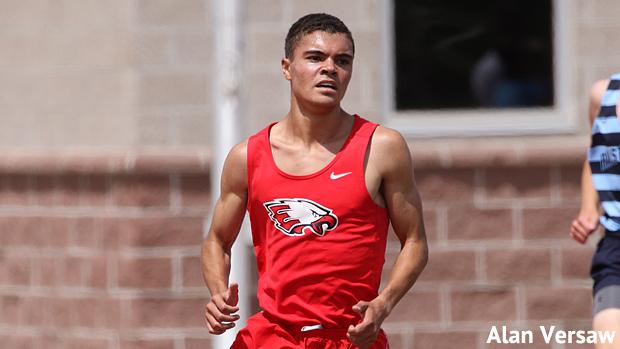 Eaglecrest's Mason Brown posted the upset special of the day in the 3200. File photo.

Brie Oakley, having not raced much on Colorado soil this spring, in typical fashion made short work of the 3200 meter field at the Centennial League Championships contested at the Stutler Bowl today. As with Tanner Norman last week, Oakley came into today targeting Elise Cranny's all-classification record in the 3200 of 10:17.48 from the state meet in 2014.

The Grandview senior set off on her usual blistering pace covering the first 800 in sub 2:30 and the 1600 in 5:05. Oakley managed 5:18 for the final four circuits of the track to lay down a new 5A all-time best of 10:23.83, thus eclipsing Lauren Gregory's 10:25.72 from Liberty Bell a few years ago. Oakley's time now officially registers as the second fastest ever on Colorado soil (though there's still some debate about an apparent 10:21 run by Melody Fairchild at the Boulder County Meet in the early 1990's).

Oakley led a 1-2-3 finish for the Wolves, with teammates Kaitlyn Mercer and Caroline Robbins both running 11:15. Cherokee Trail's Jordan Herrera and Cherry Creek's Devon Peterson each ran 11:16 as well. Could the 5A girls 3200 state qualifying be any murkier? With St. Vrain still to come tomorrow, is 11:16 even going to get into state this year?

It's not a secret that the Centennial League is chock full of talent and depth. Nowhere is that more on display than in the relays. Finals were held in three girls relays; the 800 medley, the 4x800, and the 4x200 on as well as the 4x8 and 4x2 for the boys.

In the sprint medley, Grandview and Eaglecrest ascended the top-18 list with fabulous times of 1:46.68 and 1:47.61 respectively.

The girls 4x800 saw Creek win handily over Arapahoe improving their season best in the process to 9:40.00.

In the 4x200 Overland ran a smashing 1:43.27 stamping themselves as a contender in that event. Smoky Hill improved to 1:44.37 and Cherokee Trail also broke 1:45, thus giving the Centennial League four of the top six times presently in that event.

A photo finish in the boys 4x800, which it appeared Arapahoe had possibly won, was for naught as the Warriors were disqualified as one of their runners apparently impeded a Creek runner during the race. Too bad, as Arapahoe's previous best (and still their best) of 8:16.94 might not survive the onslaught to get to state. Cherry Creek, thus, was deemed the official winner in the entertaining back-and-forth tussle with an excellent time of 8:00.31.

As with the girls 4x2, some of the fastest squads in the state take up residence in the Centennial League. Mullen, teeming with talent, won a tight battle over Cherry Creek 1:27.52 - 1:27.93.