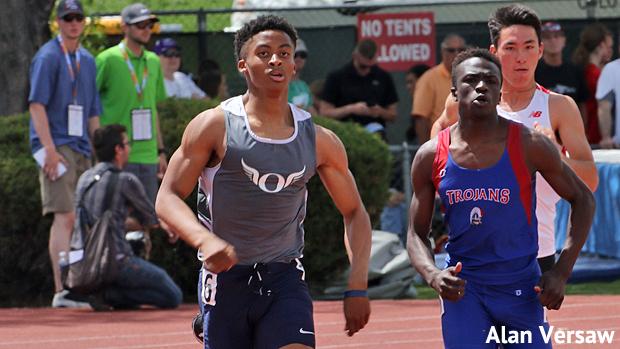 Cameron Murray set himself up for another state meet with wins in the 200 and 400. File Photo.

In a meet that typically produces highlight after highlight, this year's version of the Centennial League Championships did not disappoint.

Cherokee Trails' girls were leading after Thursday's action and they received victories in the first two Saturday track events; Jaiden Paris taking the 100 hurdles and Taylor Watson in the 100 meter dash. Later on, Watson would lead Paris to a 1-2 finish in the 200 meters.

The wind was blowing out of the south all day, thus the straightaway races were adversely affected, some with wind readings of -4.0. With these victories, and the fact that Grandview elected to rest Michaela Onyenwere after a lengthy basketball campaign, it appeared CT was well on their way to victory.

Nevertheless, Grandview had a few 1-2 finishes of their own to counteract CT's triumphs.

Kaitlyn Mercer, who is beginning to establish herself in a serious sort of way, led Brie Oakley across the line in the 800. Each of them set a personal best, Mercer at 2:13.74 and Oakley at 2:14.26. Leilah Vigil and Alexis Gregson posted the top two throws in the shot put for the Wolves' cause. Alisha Davis and Kylee Harr further solidified things for Grandview by placing 1st and 2nd in the high jump. And event victories in the 400--Lily Williams (56.25)--and the 1600--Oakley (4:59.66)--didn't hurt.

Despite the absence of Onyenwere, the McDonald's All-American in basketball, Grandview was able to pull ahead of the Cougars late in the meet and ultimately win the team title, 166-143.

Cherokee Trail, which obviously had not run their top quarter in the 4x100 relay to date, did so Saturday in smashing fashion. How does a 47.63 sound? A time that narrowly missed the meet record by .07 seconds stamps the Cougars as the state meet favorite in this event.

Cherry Creek's Delaney Smith continues to climb the ranks of the state's elite in the 300 hurdles, which she won with an excellent time of 44.22, to go along with her 2nd place in the aforementioned 100 meter hurdles.

Mariah Gordon and Julyah Wilson were stalwarts for Eaglecrest and Overland, respectively. Gordon provided a nice stick carry on the Raptors' 3rd place 4x100 that will likely now get into the state meet, to go along with her 56.91 runner-up finish in the 400. Wilson had some high finishes in her individual events along with relay work for the Blazers' 2nd place 4x100.

Arapahoe's Allison Marizza led the way for the Warriors with a couple of nice quarters on the day. First was a 58.63 third-place effort in the open, coupled with a seemingly quick leg on their 4:03.60 clocking.

Mullen was led by a trio of shot putters--Pine, May, and DeSeviere--who each placed in the top six.