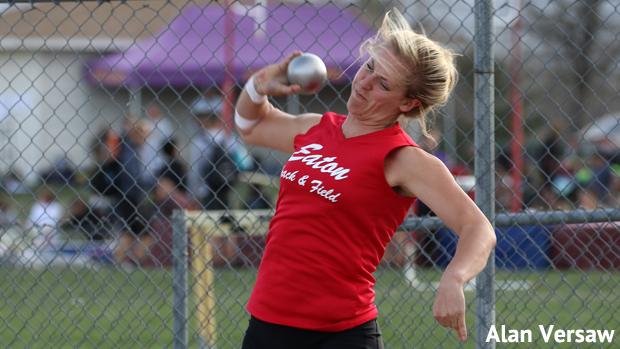 There is a long list of high-end talent at the 3A Girls state meet, and Tarynn Sieg is high on that list.

Welp, I didn't quite finish the deep dive series. This is the last one I'll get done.

The virtual meet for 3A Girls, once all the scratches are removed, shows TCA with a lead--though not a formidable one--over a closely-packed trio of Lutheran, Elizabeth, and Peak to Peak.

Peak to Peak is probably close to maxed out on the virtual meet. The Pumas scratched the events and individuals they would need to make (at substantial risk) a serious title run. The strategy at Peak to Peak this year appears to be to go after optimal performances and let the team scoring do what it does.

Elizabeth and Lutheran, though, appear to be loaded to take aim at TCA.

Lutheran will depend heavily on three events from Maya Evans--the 100, 200, and long jump. That figures to leave Evans in one relay as well (most likely the 4x100). Regan Aurich could be another deep well of points for the Lions. Lutheran should get a nice bump of points out of relays that don't involve Evans, but they probably can't lock and load all three of the 4x200, 4x400, and SMR8. If they can, they are a certified danger to claim the crown.

Elizabeth will lean, as they have all season, on jumps, sprints, and sprint relays. And, they are loaded there. Kallaway Wood handles the 100, 200, and long jump, plus, presumably, a relay. I'm guessing that relay is the 4x200, since the Cardinals do not have a 4x100 entry (though it could be the SMR8). Lexye Wood and Chloe Peterson join Kallaway as probable high scorers in the long jump. Lexye doubles as the #2 seeded triple jumper. And, as we expected, Elizabeth finally unleashed a formidable 4x800 on the last week of qualifying. Throw in a couple solid high jumpers, and that is what Elizabeth takes to the bank to cash in on this weekend.

TCA has the most event variety of the teams expected to contend for the title, but the Titans will likely have to do it without the kind of event domination Lutheran and Elizabeth figure for. Erika Willis is the pole vault favorite, and Chantae Steele could make a race of the 400, but TCA has--and will need--more down-in-the-order scoring types than either Elizabeth or Lutheran. The Titans also have all five relays qualified.

Event highlights should be as follows: