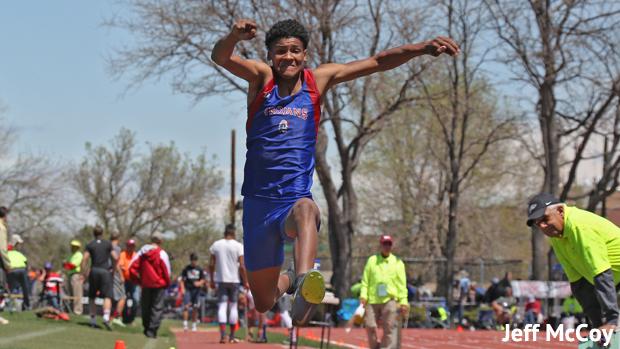 Jequan Hogan bounds his way to the first 50-foot triple jump Colorado has seen in more than a decade.

You could ask for two teams more different than Fountain-Fort Carson and Monarch, but you wouldn't be likely to get it.

As far as State teams went, Fountain-Fort Carson was sprints and sprint relays, hurdles, and jumps. Monarch was distance and pole vault. Oh, and they both had the odd thrower, plus a 4x800. And, yes, Monarch had a 4x400, which added a little suspense to the last event of the meet.

Through day one, Fountain-Fort Carson built up at substantial lead of 48-35 on Monarch. That came courtesy of a whopping 50-7.25 triple jump from Jequan Hogan, two points in the 4x800 to help offset Monarch's 10, a second in the 4x200, five points from Iosua Maika in the shot put (a placement which, incidentally, bumped Monarch's Nico Heineke-Magri from scoring in the same event), a solid third for Jason Farrell in 300 hurdles, and a nifty 1-4 finish for Donovan Williams and Jalen Lyon in the 200.

Monarch's scoring had come mostly in one big pile at the start of the meet when Isaac Green, Charlie Perry, and Zach Litoff went a stunning 1-2-3 in the 3200. Green and Litoff combined with William Dixon and Sean Gazarik for the 4x800 title at the end of the day.

Despite the relatively comfortable lead at the end of Day 1, Fountain-Fort Carson's title was anything but sealed. And Ben Montoya's crew competed Saturday as if that was the very first thing on their mind.

There were no major slips for the Trojans.

After Monarch gleaned 15 points from Green and Litoff in the 800, with an assist from the gremlin who tripped Hayelom Fitsum just feet from the finish line, to start the day, Fountain-Fort Carson came back with a fury.

Hogan got a third in the long jump and a first at 6-9 in the high jump. His fifth in the 110 hurdles added another five points to the total. 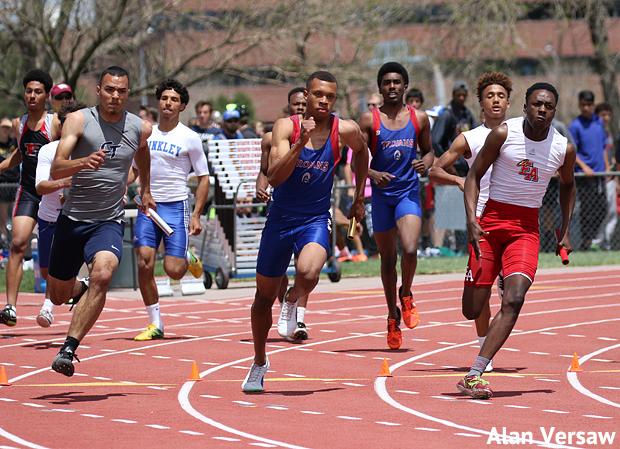 The 4x100 motored around the track and, courtesy of a huge anchor leg by Williams, took the 10. Earlier in the day, Williams had warmed up his long legs with another 10 in the 100.

Jalen Lyon got eight with a second in the 400. Jason Farrell posted seven more with a third in the 300 hurdles. The Trojans, seemingly, could do no wrong.

About the only thing Fountain-Fort Carson couldn't do on the day was stem the coming flood.

The first water over the dam with fourth-place and six points from Nico Heineke-Magri in the discus. But even that gave no hint of what was coming.

The 1600 lined up with five Monarch entries. Five entries, yes, but how many can you realistically expect to score?

The race went out tactically, with Green and Perry riding the bumper of Douglas County's Brock Helvey, daring anyone to go around. And, the longer people waited to go around, the more the race tilted in the favor of the fast guys from Monarch. When Green picked up the pace on lap three, nobody--except his own teammates--could find the wheels to go with him.

Eventually, Green dropped his own teammates--except for Charlie Perry--en route to a winning time of 4:21.98. Perry was right on his heels. The stunner, however, was Zach Litoff--who found new life with 200 meters to go an executed a cunning series of passes, nearly catching his own teammates by the finish line.

While the 1600s were doing their thing, (Cole) Rowan and (Max) Manson were finishing off the resistance at the pole vault. Rowan went 16-0 for the win, Manson 15-1 for second.

In the span of a few minutes, Monarch had amassed 45 points and suddenly found themselves sporting a newly-minted three-point lead over Fountain-Fort Carson going into the final event. Maybe, just maybe, you can win a state title (mostly) on distance. 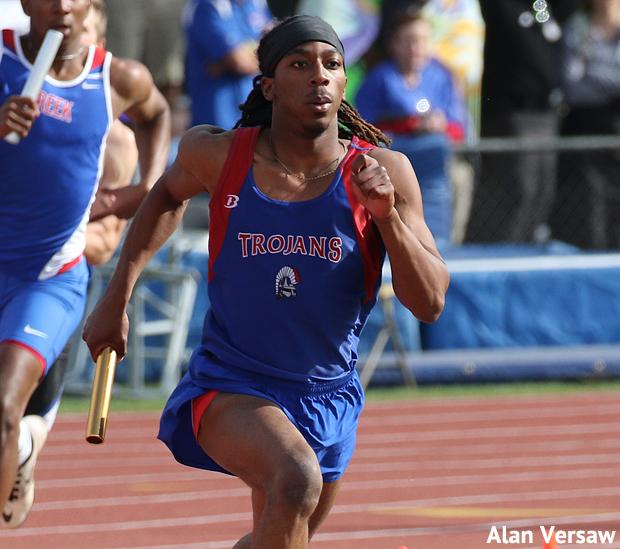 Through four laps, FFC's foursome fought off every attempted pass, save one. Jason Farrell rocketed the Trojan's to a first-lap lead. Sergio Cedano and Chance Fabian gave stirring performances, holding firm to the lead they had been given. James Thomas closed the deal. FFC's second guaranteed them the state title over Monarch's eighth in the same heat. Monarch actually got pushed out of the scoring when the results from the first heat were factored in.