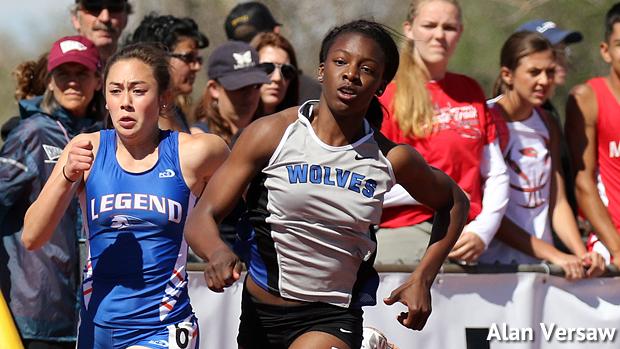 Michaela Onyenwere was an enormous difference maker for Grandview all weekend long.

This was supposed to be a showdown between Grandview and Fort Collins for the 5A Girls state title. Only the showdown never materialized, and not for lack of a decent state meet on the part of Fort Collins.

Grandview simply had the state meet to put all other state meets to rest. The final tally of 120 for Grandview to 83 for second-place Fort Collins only hints at the kind of domination Grandview exercised over the meet.

The tone was set early when Brie Oakley dropped Lauren Gregory on the last lap of a 3200 for the ages. Both runners broke Elise Cranny's all-classification record in the event. Spectators watched in eager expectation through the first seven laps and then stared in disbelief at the eighth lap.

Gregory would turn the tables on Sunday in an equally memorable 1600, but by then the door was locked and the key lost.

Between Saturday morning's 3200 and Sunday afternoon's 1600, Grandview was nothing short of dominant. And not just over Fort Collins, but over all of 5A.

Grandview already had a 70-31 lead at then end of Saturday, and it was tough to find anyone who felt that was going to turn itself completely around on Sunday.

So, how did the Wolves get there?

You could look to Michaela Onyenwere's 200 as a case in point. Onyenwere has been battling injury most of the season. Except for the wrap on her leg, though, you never would have known it. Onyenwere went third in the 200 in a blazing 24.55.

Kennede Brown scored a fourth in the 300 hurdles in 45.17. The 4x200, with Onyenwere anchoring, took home gold. A different cast of Wolves led Grandview to the SMR8 crown. Leilah Vigil's first throw was all she really needed to claim a fourth in the shot put. Kylee Harr stunned a few folks, taking the high jump at 5-8.

Before the season, nobody knew who Kylee Harr was. They do now.

And, at the end of the day, the 4x800 team of Kaitlyn Mercer, Caroline Robbins, Emily Schlichting, and Oakley hung tough for a fourth-place finish.

All that left Grandview way ahead of schedule and oozing momentum.

Momentum carried over into Sunday.

Kaitlyn Mercer took her turn in the team spotlight, finishing third in the 800. Oakley added a few more points in sixth. Though Lauren Gregory won the event, Grandview actually outscored Fort Collins in the 800. It was that kind of weekend for Grandview.

Onyenwere was back in the 100, finishing second--to Arria Minor, of course--in the 100 in 11.99. Audra Koopman gave Fort Collins a nice result, but once again the Lambkins lost ground to the Wolves. 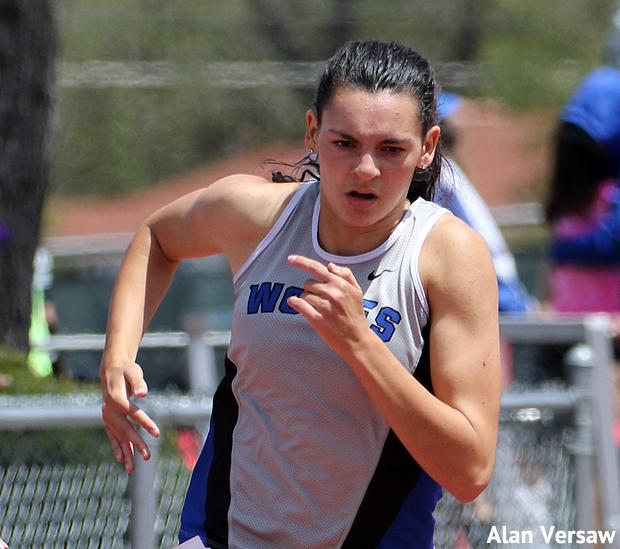 Same song, fourth or fifth verse in the 400. Jasmine Chesson of Fort Collins landed an impressive third in the 400. Lily Williams of Grandview one-upped her with a 55.33 for second. Williams, by the way, is a freshman--and an impressive one at that.

Fort Collins managed to get six points back in the 4x100 while Grandview took a break. 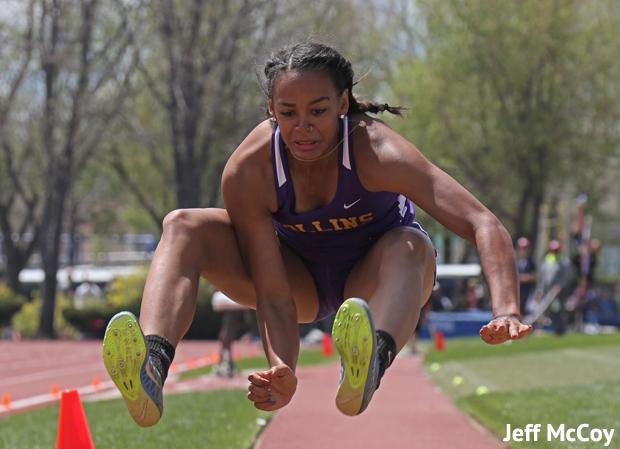 Koopman won the long jump for the Lambkins at 19-0.5, but Harr kept the point machine rolling for Grandview in fifth.

The 1600, of course, fell Gregory's way--or, rather, she shoved it by force of will in her direction.

The 4x400, however, was a microcosm of the entire meet. The foursome of Williams, Mercer, Brown, and Onyenwere pushed Grandview to a three-second margin of victory over a beleaguered Fort Collins team.