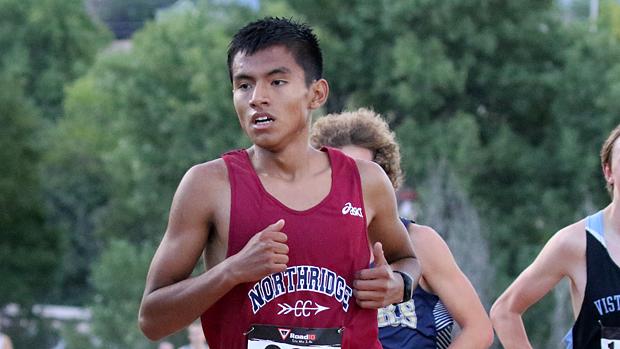 As best as we can tell, Josh Torres posted the fastest high school time of the 4th of July holiday with a 15:56 for 5K in Greeley. File photo by Alan Versaw.

All of the results I've been able to publish can be accessed by hovering over the Results link above, then double-clicking on Meet Results.

But, if you're looking for the executive summary (including a couple of races for which I have not published results), here it is:

Palmer Lake 4 Mile - This one brings out the Palmer Ridge cross country team in a serious way. A few other local schools get large delegations of participants as well. Ethan Powell was the top finisher among this year's high schoolers in 20:26 (Did I mention that the race is on trail, not road, and gradually downhill more or less the whole way?). Among boys who will still be in high school this fall, Ryan Matson took top honors in 21:08. As best as I can tell, middle schooler Hope Stark beat all high school girls in 25:35, while Camille Tredoux took high school honors in 25:37 and Nicole Phaneuf among those who will still be in high school this fall with a 25:45.

Boulder 4K on the 4th - High school participation was light here. Legacy's Mark McNabb ran 14:39 for high school honors on the boys side. You have to go ridiculously deep in the female results to find the equivalent honor for girls.

Superior Downhill Mile - Before the Boulder 4K on the 4th, they run a (seriously) downhill mile in Superior. Some folks run both races. Brynn Siles ran 4:58 to finish as the top high school female. Tommy Gilfillan's 4:46 was top among Colorado high school boys.

Freedom Run 5K - This Evergreen race saw Cole Sprout take the overall title in 16:42. Wyatt Oglesby was a sixth-place finisher in 18:40. Lanie Szuch isn't a high schooler yet, but took top female honors just the same with a 19:15. Abby Oglesby was the top female high schooler in 20:18. But, since she just graduated, we'll also mention Bri Teegarden's 20:37.

Ft. Collins FireKracker 5K - They have an elite and a citizens division for this race. Quite a few high school names showed up in the elite race. Blake Hubert's 16:21 took top male high school honors. Sydney Teslow's 19:43 did the same for girls.

Run 4 Greeley - It's a 5K, though you might infer something different from the race name. Josh Torres sent a message with a 15:56. Course differences aside, that was your top high school time for 4th of July races. Just-graduated Denisse Ojeda ran 20:39, and Maria Geesaman ran 20:55 for high school honors.

HRCA Independence Day 5K - Mountain Vista isn't the only school that shows up here, but Vista Nation certainly dominates the numbers game here. Caden Foster had a 17:44 and Shae Henley a 19:41 for honors.

Telluride Rundola - The race is a trifling 4600 feet (roughly 0.8 miles, by the most direct route available) but gains 1810 feet from the bottom of the gondola to the top of the ridge. This is a serious hill climb. Soleil Gaylord was third female finisher overall in 29:51. Simon Kearns out of Mancos was the top finisher among current high school boys in 26:54.

Louisville Let Freedom Run 5K - We'll take Sydney Swanker as your top high school female in 21:52, and I'm not sure I found any current high school males in the results.

Loveland Liberty 5K - A lot of recent male high school graduates ran here, but honors for those who'll be around this fall went to Dylan Schubert in 17:36. I think Maci Ames takes that honor for females in 21:06.

July Nielsen Challenge - This was on Saturday, July 1, and on flat, hard-packed trail rather than road. Given that, Matthew Roberds ran 10:41 for two miles, and Sandra Dillinger ran 14:11.

That's what I've got for you, and there you have it. And now you're a little bit smarter about who's been pounding the miles so far this summer.