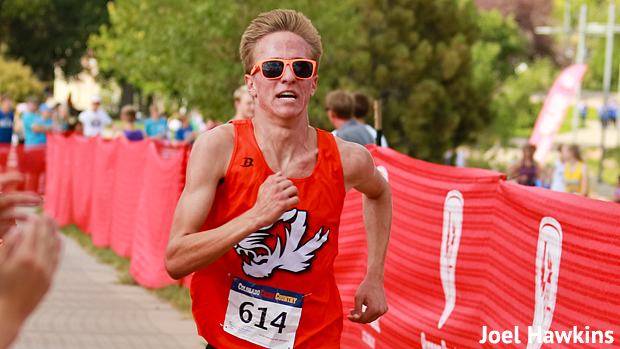 Chase Dornbusch came up with the win at Cherry Creek. Can he make it a twofer at Arapahoe?

This weekend, as with pretty much every other Labor Day Weekend here in Colorado, the high school cross country meet of the weekend is the Arapahoe Warrior Invitational.

Roughly 2000 (no, that is not a typo) athletes are scheduled to take the course Friday in one of the races at the annual running of the Arapahoe Warrior Invitational. That's a lot of chips to read, but it would be even worse hanging pull tabs on a stringer.

I'd call it the be-seen-at event of the weekend, but lots of people will show up there, run, collapse on the grass and seemingly never be seen. That's how it works with 2000 athletes.

Harrison Scudamore might get a nod as Theodore's top challenger, except that Scudamore is not among Friday's entries. Some others who might figure among the upper echelon of finishers include Michael Long and Brock Helvey of Douglas County, Carter Dillon of Mountain Vista, Chase Dornbusch of Lakewood, and Easton Allred of Rock Canyon. It will be a shocker if the meet individual title slips outside of that group.

Mountain Vista gets team favorite status going in. But, they also get to face down with Rock Canyon again this weekend. And, presumably, Rock Canyon will be sending a more complete team to the course this time around. You can get in trouble, though, counting on too much from "presumably."

Poudre figures among the next tier of team finishers. Heritage is a team with a golden opportunity to put a stamp of validation on last week's win at Cherry Creek. There aren't many small school teams entered, but Salida looks like the best of the collection who are making the trip.

The girls race is loaded up front. Addi Iken, Jenna Fitzsimmons, Sarah O'Sullivan, Caroline Eck, Shae Henley, Kasey Klocek, Luna Slater, and Carley Bennett. The nice thing about this meet is that people don't sit out unless they have to, though Air Academy does appear to be leaving most of their A-teamers on the shelf for this weekend.

In the freshman watch division, Cherokee Trail's Campbell Faust comes back for another turn after a big showing at the Aurora City Championships.

Mountain Vista should be a substantial favorite to win the girls race. Rock Canyon might be second here, but probably a distant second. Steamboat Springs, ThunderRidge, Fairview, and Golden should be other teams worth giving some close attention to.

Last year, Salida edged Steamboat Springs at State, but the momentum may have shifted in Steamboat's favor for this round between the 3A powers.

Check back here after Friday's races and into the weekend. We'll try to do some crunching of the results to reveal some things that just don't show up under a casual observation.