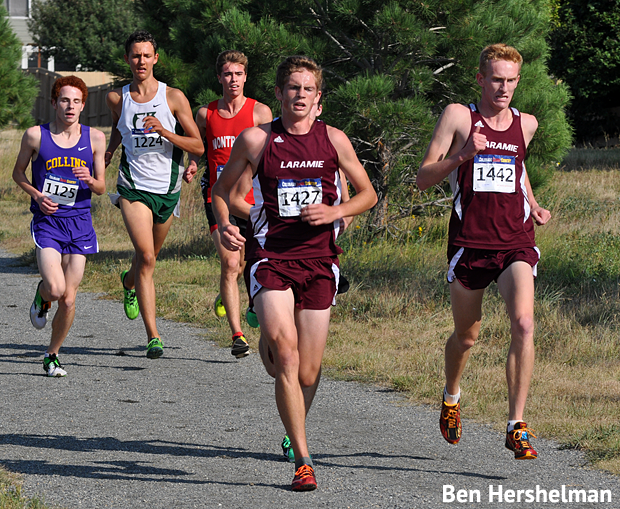 The Colorado guys chased hard, but ultimately Laramie won the battle and the war.

Thornton is known for many things. None of those things are small. Big houses. Big box stores. Abnormally wide roads. And big fields. Checking in at 44 teams, the Thornton Invitational found a rather large field behind the Margaret Carpenter Rec Center on Friday afternoon and threw down what will likely check in as one of the larger meets of the season.

Temperatures hung in the low 60s with a slight breeze. Save for a squishy start and finish area, the week's worth of rain did little to dampen the course. That is what happens when much of the course is comprised of concrete, crushed gravel and crushed asphalt.

For the record, Thornton is not a slow course, but it is not entirely a screamer either. Athletes need to negotiate about a quarter mile of grass at the beginning and the end. There is also the matter of the hill that reaches its terminus at the end of mile 1. It climbs, rather steeply for at least a third of a mile before flattening out. Mile 2 starts flat with some downhill, and mile 3 screams down toward the finish line. If there is a specific reason that the Thornton Invitational tends to run fast it is most likely due to much of the leg work on the course taking place in the first half, and the fact that it runs at the end of the invitational season when the temperatures begin to dip.