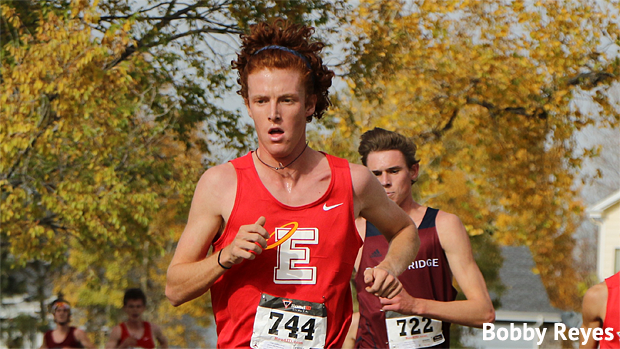 Harrison Scudamore sets out to building a lead he would never relinquish.

Small slices of bright blue tape held up the coveted official results on a wooden board. Swarms of runners, parents, and coaches lingered with their phones out, waiting to get a glimpse and snap a photo for proof.

The 5A Region 1 and 2 cross country championships took place under sunny skies on the near-pancake flat course at Northglenn Open Space Park Thursday. The one and only thing that mattered on this day was qualifying for state, which would mean that every runner, parent, and coach desired to know two things: who finished in the top-15 individually, and what teams finished in the top-four.

When the white sheet went up, it was met by two opposing reactions.

On one end, there would be high-pitched shrieks of victory. "We're going to state!" the voices would scream out, prompting more cheers. Indeed, they had lived to battle another day - their dreams would live on another nine days in which they'll undoubtedly spend in the constant state of stress and eagerness that accompanies peaking.

On the other end, there would be silence. It would be a silence so loud that their actions alone held just as much gravity as the high-pitched shrieks. They'd let their heads fall, tired eyes caste down to the green grass, shaking their heads in disbelief as the season ended prematurely. The long walk back to the team tent and a cold winter ahead was not what they wanted, but it's what they got.

It was day of great happiness, and a day of great despair. While some runners ran their final race of the season, others earned their right to toe the line in Colorado's most coveted high school cross country race: the 2017 Colorado State Cross Country Championships.