The Valor Christian girls were flying just below the radar all season long.

It was only if you looked at JV races to see where two of their eventual top-five were running that you could see the potential.

But even then, they'd still need another spike in that curve of improvement if they wanted to really step up onto the national stage.

After finishing sixth at state in a deep, deep 5A field, talks of a potential run for Nike Cross Nationals became louder, as they knew they'd be adding two more to their varsity at Nike Cross Regionals - Southwest.

It was like they all shared this secret, and they were patiently waiting to tell everyone else - in late November.

What makes Valor's rise in 2019 all the more impressive is their curve of improvement over the past few years (read further down for that story).

Valor stunned the southwest region - and the country - with a second-place, automatic bid to NXN. It was perhaps everyone's best race of the all season, at the time. They upset several previously nationally-ranked squads before going on to solidify their spot among the country's best two weeks later.

Earning that automatic bid was additionally important for the squad, as they knew a third or fourth place finish would mean the NXN committee would look further into the season for verification of their talents for an At Large Berth - but they didn't race with two of their top five all season, which shifts their results quite a bit.

Fortunately, they got the job done on the right day.

Their NXR-Southwest finish launched the previously unranked squad to No. 16 in the country, but they weren't done yet.

In Portland the first-time NXN squad took yet another step upwards, finishing eighth at NXN. Their performance cemented a No. 8 national ranking.

A year ago Valor was ninth at the state meet. This year they cap the season with an eighth place finish at Nationals, and a No. 8 national ranking.

Excerpt from "Bold And Determined, Valor Is Ready For Nationals"

"10 pairs of running shoes in varying degrees of cleanliness circled in a tight group alongside the road.

The owners spread their arms around each others shoulders in camaraderie while their eyes locked on their coach, Greg Coplen.

"Take some gratitude moments," he said. "This won't happen again with this specific group. It's a pretty awesome deal. You're laying the foundation for the people who follow after you."

Among the 10, seven with tight ponytails and colorful attire gently nodded. They absorbed Coplen's words, knowing that they were making history as Valor Christian's first team to qualify for Nike Cross Nationals.

"We're going to run this one for the seniors, who we'll be saying goodbye to for cross country," Coplen continued. "Before it lightens up for track..."

"We're not losing anybody!" Ashley Jones quipped with a smile and twinkle in her eyes, leading the group to share a laugh.

It would be one of many, as the squad endured their final pre-NXN workout Tuesday afternoon in good spirits. With the day's instructions set: minute intervals at race pace, they were off.

They ran down a vacant dirt road that was still drying from last week's heavy snow, just beyond the most southern tip of Denver where the hills roll south into the abyss between the capital and Castle Rock.

It was unlikely that clean shoes wouldn't survive this run.

Their ponytails dangled back and forth in dark blue hues of silhouettes while the sun descended into the mountains, taking the warmth with it. They filled the spaces around them with laughter, as if the impending race - Nationals - held no qualm over them.

And while they were just days away from the biggest race of all of their young careers, there was something decisive lingering in the air. It wasn't fear or anxiety, it was confidence.

The confidence may surprise some - as Valor has to be the Darkest of Dark Horses to line up on the starting line in Portland for Nationals, but they trained and raced through the season knowing that they had two semi-secret weapons they'd get to unleash at Nike Cross Regional, as Lanie Szuch and Isabella Prosceno - two transfers who had to sit out the regular season due to CHSAA rulings - would get to race alongside them.

They knew all along that they were much stronger than they appeared. The only real question they had for themselves was How Strong?

READ (more): Bold And Determined, Valor Is Ready For Nationals

READ: Valor Christian Has Realized Its Potential Just In Time 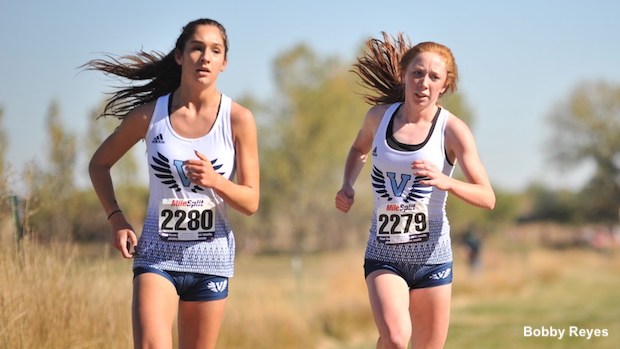 The gradual unfolding of What Could Be became a little more evident after Desert Twilight in late September, where Szuch dropped a 17:34 in the Open Race - that result alongside Taylor Whitfield's 17:34 clocking, and freshman standout Brooke Wilson's 17:47 in the Championship race were more than a subtle hint at what would be.

"It was a dream (to qualify for NXN) in the summer," Reese Dragovich said with her brown eyes beaming with excitement. "After State it became a real goal, not just a dream. We started to believe that it could happen."

Their sixth-place state finish might not have appeared as much, but they saw more between the lines than anyone else.

"We knew what the potential might be," Jones said as the sun dipped behind the mountains to the west. "But I don't think we really knew how big it could be."

Their strength was on full display when the girls from Valor nabbed the second and final automatic qualifier to Nationals at NXR-Southwest, sending shockwaves through the country, as they beat several nationally ranked squads in the process.

"Getting second was pretty phenomenal," Jones explained. "Our program had never experienced anything like this before."

While everyone was scratching their heads, trying to figure out who this squad was, the girls from Valor had a jump on everyone. Colorado's best kept secret knew it all along, and they pulled the curtain back in grand style.

It might have seemed like a "Blink and you missed it" sort of rise for Valor, but Coplen wouldn't say it that way.

"This is the result of seven years of hard work," Coplen shared.

And the proof is in the numbers - just seven years ago the program didn't have one sub-20 minute 5ker, and it would've taken a 22:47 to make the top five. This year their entire top seven has run faster than 19:32, and it took an 18:35 to be their fifth fastest runner.

"When Taylor (Whitfield) first joined she was walking in the back of the pack," he said with a laugh.

But as with all great things, it had to start somewhere, and Coplen and his crew continued the grind, building something that would last.

"We wanted to build a culture that the kids would want to be a part of," Coplen explained. "We wanted to create a culture with high character, that stood for the right things."

That culture brought in runners like Cole Sprout, who's chasing his first national title Saturday, and more recently, Szuch and Prosceno.

"Lanie and Isabella are here because of what they saw," he explained. "We knew this could be a special team with them."

And true to form, the girl's team has gone from being competitive within the state, to competitive across the country. After being previously unranked, they fly to Portland for NXN still slightly under the radar, ranked No. 16 nationally.

Their rapid rise now prompts more questions like: How do they top NXR-SW? And: How fast can they go?

"You don't want to be just happy to be there (NXN)," Coplen shared. "But at the same time we're going in very proud to be there. We want to enjoy the moment."

And what of next year?

Only two of their top seven will graduate, shedding light that the upward trajectory of the squad appears in tact, if not getting a boost. Despite these facts, Coplen and his crew are quick to focus on what's more immediately in front of them.

"I don't want to live in the thought of next year," Coplen explained. "But you can certainly look at it, we could have some special years ahead of us."