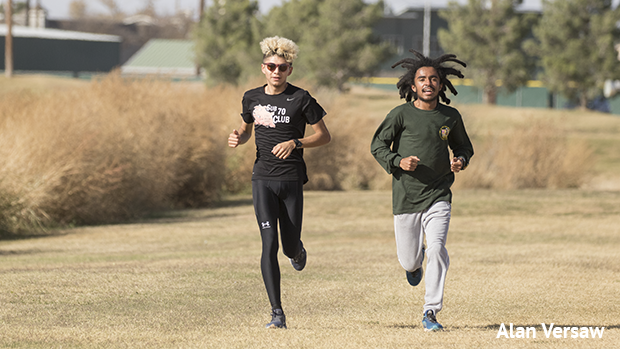 There are hints of smiles today, but it will be serious race faces tomorrow.

The meet will grow in subsequent years. Twenty years ago, if you had started a national meet in mid to late November, you would have had only Foot Locker Regionals to compete against. Much has changed in the last 20 years. But, attendance at tomorrow's meet will come close to the attendance of several of the first team regional races first held in 2007.

It's not easy to pick a favorite. Several teams from Texas know each other to some degree, and a handful of teams from Colorado know each other well. But, while Colorado teams run on hardened trails but must compete with the disadvantage of thinner air at altitude, many teams from other states run on grassy courses without the disadvantage of altitude. It's not always easy to say what will happen when you bring teams together from widely varying locations.

That said, the team from Marlington, Ohio, looks very good on paper.

The boys championship race also features a rematch of the top three teams from Colorado's 3A state race. TCA will be without the services of Matthew Edwards for this race, but we can still probably count on a good, spirited rematch between TCA, Salida, and Frontier Academy. The same three schools have also brought down girls teams for the event. At this point, however, no closely contested state rematches are on the agenda for race day.

It's nice to think about having answers to all these questions, and a few more, by this time tomorrow.

Check back here tomorrow for results, then later in the day for coverage and photos.