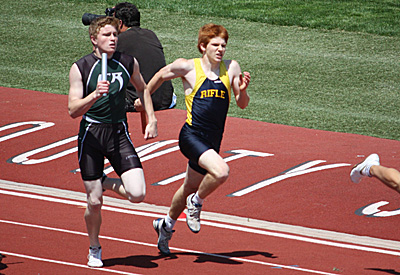 Last year, Andrew Proebstle and his Rifle teammates were competing in 4A. This year, they threaten to take over 3A. Contributed photo.

Every state meet boasts some great match-ups. The best each year vary from event to event, but since we have all five classifications at the same venue, we might as well take a look at where this year's best are likely to fall.

With that in mind, let's take a classification-by-classification look at where the best match-ups figure to fall.

To my way of thinking, the two best 1A matchups are relays. In fact, the way these two relays go could have a great impact in determining the eventual state champion. Those relays are the 4x200 and 4x400. Both pair Walsh and Springfield. The 4x200, especially, could be pivotal. If Springfield upends Walsh in this relay on Friday, the triumph could do a great deal to bolster the confidence of the Longhorns. If that happens, it could all very well come down to the 4x400. In both relays, Walsh and Springfield are the #1 and #2 seeds. In both relays, they're closely matched.

Another great 1A match-up comes in the long jump where South Baca's Genesis Enriquez goes up against Karval's Taylor Russell. It's not at all unthinkable that Idalia's Adam Marostica takes everything over as well. All three are 21-foot-plus long jumpers. All three are seniors hoping to leave their mark on state meet history.

It's hard to say which will be the better match-up between Friday's 3200 and Saturday's 1600, but both feature western slope standouts Ty Williams and Chris Zirkle. Both have the potential to go right down to the wire.

If all goes well in prelims, the 4x100 should feature a lights-out showdown between Lyons and Paonia. Both teams have pretty much had their way with the competition--even when the competition featured much larger schools--all season long. For one of these teams, that pattern could culminate in a state title.

The discus features Daniel Weirich of Eads and Ty Van Oort of Rye. Both have been pitching monster throws all spring. Both figure to be something on the order of 30 feet ahead of the rest of the competition.

It's easy to think sprints are where it's at for 3A this spring. In the 100, Zach and Taylor Browning try to cross the line ahead of Mead's Alex Mead. In the 200 and 400, they try to do the same thing against Rifle's Andrew Proebstle. Then they repeat the match-up with Proebstle in the 400. The 100 and 400 contests on Saturday should be memorable if everyone is still standing by that time. I can't recall 3A sprints ever having it this good.

3A distance isn't looking bad, either. Thursday evening should pit Josh Simkins, Evan Fortney, and Josh Noriega in a thriller of a 3200.

Whether it determines a team state championship or not is a story waiting to be told, but Rifle and The Classical Academy should be matching 3:26+ 4x400s in Saturday's closing event of the state meet.

It's a doozy of a 100 that pits Malik McKinney and Cyler Miles of Mullen against Broomfield's Trent Ireland, Northridge's Jeff Richmond, and Vista Ridge's Brandon Cartagena. Five lanes of scorched track.

The 400 final that should pit Boris Berian against Nolan Mayhew could be the biggest event of the whole meet. Berian has owned the last couple of match-ups between the two, but this one's not a done deal yet.

And how about the dead heat in the seed times between Javonte Walker-Reese, Hunter Warwick, and Scott Carter in the 110 hurdles? This is one we may never have settled in the olden days before finish line cameras. It's for reasons like this that some smart guys developed FinishLynx.

I like a pole vault that matches four 14+ vaulters in Derek Wing, Dillon Manzanares, Mikal Mekhraliyev, and Daniel Pierson. Maybe someone touches 15 before this one finishes?

It won't be long before one of the most anticipated events of the entire state meet takes center stage. Will Connor Winter and William Kincaid have the conditions conducive to making one final run at Brent Vaughn's 3200 record? Will anyone else be able to join them and sustain the pace?

Both the 100 and 200 should be blazing with names like Marcus Harris, Raymond Bozmans, Gavin McHenry, and Markesh Woodson. Stirring the pot just a little, for a few of these guys there could be a team state title hanging in the balance of the results of the 100 and 200.

Casey Riggs, Casey Young, and Trey Talley have been aiming toward a 110 hurdle showdown all season. We hope it happens in finals.

Fountain-Fort Carson, Chaparral, and Fort Collins should put on a screaming good contest in the 4x100. Once again, state title implications are written all over the outcome of this one. But you don't want to exclude Arapahoe from any state title discussions and they get their relay opportunity to take center stage in a 4x400 showdown with Rangeview.

In field events, we get a triple jump with four guys who surpassed 47 feet this season, Trey Richardson, Reggie Allison, Jonathan Edmunds, and Kordale Taylor. The discus promises one fine showdown between JT Van Veen, Jake Schneeberger, and Brendon Austin. They're all over 175 feet for the season. If Mason Finley wasn't still such a recent memory, we'd be dazzled by presence of three guys throwing in that range.

So, now you have your reasons to look a little beyond the adventures of your own personal rooting interests at the state meet. Take an extra opportunity to take in many of the spectacular events that will be taking place at Jeffco Stadium. And take an opportunity to thank an official or a meet worker for all that they help to make possible!