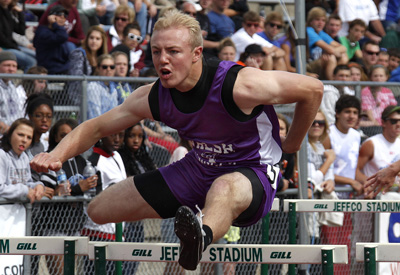 Landry Cogburn closed out a brilliant high school career with three individual and one relay state title on Saturday. Photo by Alan Versaw.

All up and down the Main Streets of the towns of Colorado's eastern plains, shuttered businesses are the rule. These once-bustling centers of agricultural commerce are fighting for the very existences.

Somehow, however, none of this seems to have impacted the track and field teams in these communities.

Springfield, Merino, Simla, Walsh? Add in a few more that are still competing in the 2A ranks. Track and field is very much alive and well at these schools. And, for one glorious weekend in May, Merino and Walsh were on top of it all.

For Merino, the route to a state title took a detour around several traditional favorite events and concentrating on events that take a little more patience to develop. Merino had no entries in the 100, 200, 4x100, and 1600. But the Rams helped themselves to big points in events like the discus, 4x800, 4x400, and pole vault. Though chased all through the meet, Merino had more than enough at the end to put away the threat posed by Simla.

Simla won the 4x100 and 4x200, and got a win from Kristen Wilson in the triple jump, but simply couldn't put points on the board fast enough to keep up with Merino.

For the boys, the much-anticipated battle between Walsh and Springfield lived up to, and perhaps even exceeded, expectations. Walsh won going away, but these two schools produced performances that far outstripped the possibilities implied by their respective enrollment counts.

Laken Alley returned to the Walsh line-up for the state meet. And, although the taping on his legs suggested a recent hamstring injury, his presence took what could have been a close race and blew it wide open. Alley won the 100 in 11.36 (+2.1). Alley also ran the 400 but showed effects of being out for several weeks, finishing only seventh. He did, however, provide a strong presence on two Eagle relays.

As much as Alley's return to action lifted Walsh's fortunes, it was Landry Cogburn who dominated the 1A state meet. Cogburn set 1A state records that may last longer than the lifetimes of those reading this article 14.57 (-2.0) in the 100 hurdles and 38.73 in the 300 hurdles. While not as "out there" as the hurdle records, Cogburn's 200 time of 22.49 sets a nice standard and put him nearly a full second ahead of the next finisher.

You would think that two athletes like Cogburn and Alley would be enough for a school with a total enrollment of less that 50 students. But Walsh got point contributions from several more athletes, including Jonathan England, Jaxon and Weston Meardon, Terrell Stafford, and Ethan Sharpe. In all, Walsh scored in 15 of 18 events and blasted out a 3:29.68 4x400 to close out the meet.

Nearby rival Springfield took second, as expected. The Longhorns won every relay except the 4x400 and added a win by Bo Hutches in the 800. Springfield did not lack for quality, they just didn't have as much of it as Walsh.