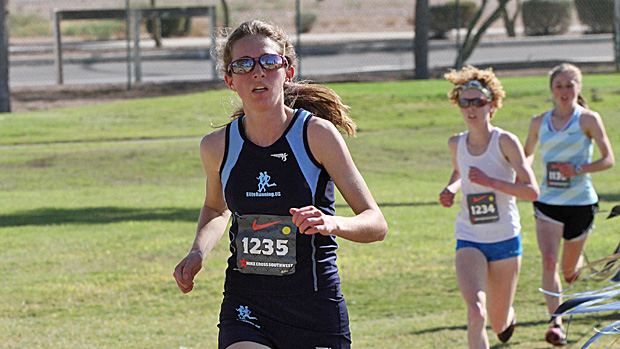 Last week's race in Arizona didn't end well for Sydney Scott. A little change of scenery in Wisconsin this week, however, did the trick. Photo by Alan Versaw.

It's been a while since Colorado sent only one competitor to Foot Locker Nationals. So, when Sydney Scott arrives in San Diego next week, it will be new friends she'll be mixing it up with.

Scott's 17:43 on the storied UW-Parkside course was good enough for sixth and a ticket to San Diego for Foot Locker Nationals.

Just missing on the girls' side was Nederland's Kelley Robinson. Robinson completed the course in 17:49, but the six seconds she was behind Scott also amounted to six places. And 12th misses going to Foot Locker Nationals by two places. Also from Colorado, Birdie Hutton finished 18th and Melanie Nun 21st.

Things were slightly more disappointing on the boys' side.

Normally, beating Danny Carney by one place would be a very good day for Ty Williams. But, one place better than Carney was 12th place, with both clocking finish times of 15:26. It's difficult to say from this distance whether or not Carney was feeling some ill effects from a second consecutive weekend of big travel.

Taylor Anders, in 15:55, was the next Colorado finisher in 48th place.