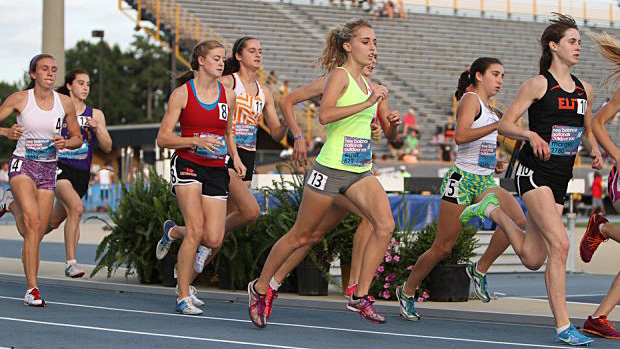 Karina Ernst had Colorado's top individual finish at NBON this weekend with a 4:52.84 mile for fourth place in that event. Photo by Jeff Adams/MileSplit.

As weekends of post-season track and field go, they don't get much bigger than this one was.

The single biggest headliner performance for Colorado's high school aged athletes was a second in the 100 hurdles for Dior Hall at the USATF Junior Outdoor Track and Field Championships. Hall ran 13.48 in prelims and 13.45 in finals, both wind legal, to claim second.

But, Hall's effort was scarcely the only highlight of the weekend. Valarie Allman threw 167-0 to finish sixth and add three feet to the all-time best high school discus mark by a Colorado athlete. Danielle Williams went 41-1.5 (+0.7) for a new personal best and a fifth in the triple jump. Chyna Ries long jumped 19-4 (-0.9) for ninth in the long jump. MaryBeth Sant missed advancing out of prelims in the 100 with an 11.86.

There was also a small contingent of Colorado high school athletes competing at New Balance Nationals. The individual performance of greatest note there was a 4:52.84 mile turned by Karina Ernst. That effort was good enough for fourth overall. Enrst also helped anchor the Thompson Valley 4x800 relay to a second-place finish with a 9:03.42.