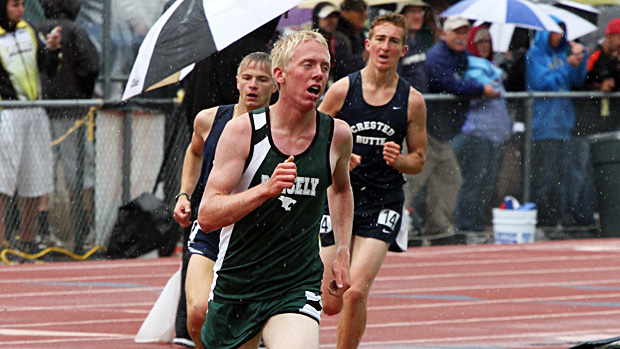 Rangely's William Scoggins has weathered the reign of Ty Williams and now will return in 2013 as the top-ranked 1600 runner in 2A. Photo by Alan Versaw.

On paper, 2A boys doesn't look to be all that interesting from a team perspective in 2013. Lyons dominated this year, and has the horses coming back next year to dominate again. It's going to take a major move from some team to unseat the guys in blue. Simply stated, Lyons has become one of the state's premier track and field programs. There are any number of 4A and 5A programs that wish they were as deep and as balanced as Lyons is.

Before we go handing out any trophies, however, it would be well to note that it isn't yet 2013 and a lot can happen in the next 10 months. Still, none of that has happened yet--at least none that we know of.

What we do know of already is that Lyons will be bringing in a couple of talented freshman distance runners that don't even show up yet in any virtual meet analyses.

So, here's a look at what a 2A boys virtual meet of just the returning athletes from this year would look like. At this point, Lyons sits comfortably ahead of Rangely, Hoehne, Yuma, Fowler, Telluride, Limon, and more.

These rankings were calculated by scoring the rankings as a meet. We took the individual rankings only and scored them as a normal meet: 10-8-6-5-4-3-2-1.

Athletes whose graduation years are unknown were left out of the list.