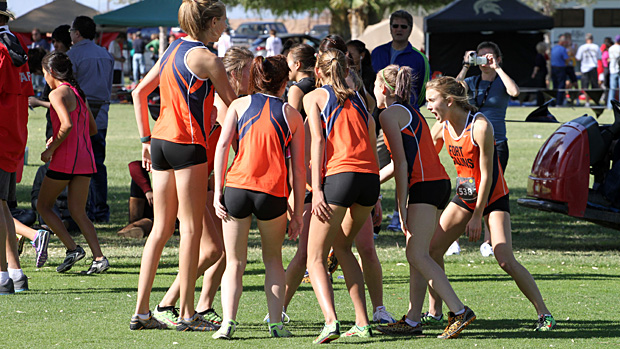 When the Fort Collins girls showed up fired up last November, it was a case of game on, game over. Colorado Track XC file photo.

There was a good number of us last fall who dared to dream that the domination Fort Collins had exercised over Nike Cross Regionals - Southwest was over. The Lambkins sputtered through the invitational sesaon and came up short to Monarch at the Colorado state meet. They have every appearance of a team snakebit.

Apparently, however, snakebite is a non-fatal affliction. Fort Collins took advantage of their three weeks off between state and NXR-SW and came to Arizona with a Grand Canyon sized chip on their shoulder. It wasn't even close. It was simple, methodical, and quick. It was Fort Collins at their best, possibly the best they've ever run in Arizona.

The good news is that they probably won't have as even of a team effort again this fall. If you've coached cross country long enough, you know that those moments when everyone on your team is on top of their race on the same day and the right day are few and far between. Chris Suppes enjoyed one of those moments last November 19.

The bad news is that they have everybody back, and probably a couple of new phenom freshmen coming into the program, to try to make it happen just like it did last year.

But, Fort Collins isn't the only team coming back with some serious potential. Here's a quick preseason look at all of last year's top ten teams, plus a glance at a couple more teams that may be worth paying attention to as the season develops.

1. Fort Collins (Colorado) - Like we said, they're all back, and there's probably no better position to be in than the position of bringing everyone back. Erin Hooker had an abbreviated track season this spring with a nagging injury issue, but the fix has been applied and Hooker figures to be back at the front of the pack this fall. Devynn Miller only got better and better as a freshman last fall and returns as the #2. Kira Miklos and Michelle Kramer also ran under 19 minutes at NXR-SW, and Kari Van Zyl nearly did. If you can't run 19-flat, you probably aren't making this team this fall. Fort Collins has no apparent weaknesses.

2. Xavier College Prep (Arizona) - If there is a team that stands on the kind of terra firma necessary to challenge Fort Collins, that team is Xavier. #2 Breanna Perrone graduated, but there are many key pieces coming back, and this team has been on a steady upward trajectory for at least five years. Xavier ran a very conservative race early last fall and rolled people up over the last two miles like there was no tomorrow. Sarah Fakler returns for her senior season. Freshman phenom Lauren Kinzle is back for her sophomore season. Samantha Mattice, McKenna Gaffney, and at least three more return with 19-flat or better credentials. And Xavier seems to have no problem attracting the top talent in the Phoenix area.

3. Monarch (Colorado) - The story line is getting a little repetitive here. The Coyotes return the full squad from last fall. Claire Green, Kaitlyn Benner, Taylor Floming, and Ashley Litoff each ran faster than 19:00 at NXR-SW last fall. Add to that observation the fact that Monarch is maybe a little chafed over not getting an at-large bid last fall. If they're not chafed, I'm chafed for them. This was a superior team that just happened to run into a couple more superior teams at last year's regional meet. Monarch will be back in contention this fall.

4. The Classical Academy (Colorado) - Of the top teams at last year's regional meet, the Titans took the biggest hit to graduation. Regan Mullen and Shelby Stableford, who finished 8 and 13 overall, both graduated. There aren't many ways to replace two sub-18:20 runners, and maybe especially so in a school with a smaller enrollment. TCA does return the rest of their regional team, however, plus a couple of promising younger runners who ran well in the open race last fall, but it will be a major accomplishment to hold onto their #4 finish from last fall. Lauren Hamilton, who finished 62nd last fall at 19:15 ranks as the top returner.

5. Ogden (Utah) - This is probably the only NXR region last fall where Ogden would have finished as far back as fifth. And, if track season is any indication, the Tigers are on a serious prowl. Wave good-bye to Jamie Stokes, but don't lose any sleep over how Ogden will replace her. This program is brimming over with talent and the new talent just keeps coming in waves. Look up and down the results from this track season and try to tell me that this team doesn't look hungry to prove something. Sarah Feeny and Stokes were way out in front of this squad last fall, but girls like Avery Calton, Jessica Sams, and Melissa Garrett did some serious closing of the gap in track season. Ogden will bring no weaknesses to NXR-SW this fall.

6. Davis (Utah) - If you're not familiar with Utah, let me fill you in. Davis has the Midas touch. Pretty much everything they put their hearts and minds to turns to gold. Their top six finishers from last year's regional team are back, led by Joanna Boyd, Madison Garlock, and Shea Martinez. There are a lot of folks wondering how Martinez slipped back as far as 50th in last fall's race, but none of those people expect it to happen again this year. Like Fort Collins, like Xavier, and like Ogden, this is a very deep team. Corbin Talley will have choices to pick from on this fall's roster--perhaps too many choices. Utah experienced something of a distance renaissance this spring in track and Davis was on the very cutting edge of that. It's going to be tough for them to climb much from last year's finish, but it's tough to expect them not to, too.

7. Mountain Vista (Colorado) - The Golden Eages had the tightest pack time of any of last year's top ten teams. And, to borrow an expression from NFL days gone by, The Pack is Back. To climb in the team standings, it's absolutely essential that Mountain Vista gets a little faster right down the roster through the top five (and a little beyond wouldn't hurt), but don't be thinking that's impossible. This is a closely-knit group and most of them are going through their final year of high school together. If Karlee Schwartzkopf and Lindsey Smith elevate their races just a little, look for the rest to follow. This team could be the sleeper in last year's top ten.

8. Skyline (Utah) - The Eagles staggered a little through the end of their season after a brilliant first month or so. Jackie Winterton graduated and left big shoes to fill, but Caroline Weiler and Jeni Townsend return. Skyview very much needs to strengthen their races at positions three through five to make a run toward a higher finish this fall.

9. Mountain View (Utah) - Any way you slice it, dice it, or fry it, losing Ashleigh Warner to graduation hurts. Losing three of your top four hurts even more. Amanda Turnbull returns for her junior season, but this has the look of a rebuilding year for the Bruins.

10. Thompson Valley (Colorado) - Graduating Karina Ernst blows a massive hole in the leadership of this team, but the Eagles have proved themselves resilient over the years and the other top runners from last year are back. Megan Irvine, a sprinter with the endurance gene, figures to lead the show, and expect a better finish from Thompson Valley than last year. It seems more than realistic, with the talent on this team, to project all five scorers under 20:00 this fall.

Other teams to watch:

Los Alamos (New Mexico) - After destroying the New Mexico state meet the first weekend in November and all comers throughout the month of October, Los Alamos fell inexplicably flat at NXR-SW. Good teams have a way of learning from that kind of experience. Los Alamos is a good team. Like a few other teams on this list, Los Alamos brings back the entrie franchise. And a lot of those returners are seniors this fall, meaning this is their last opportunity to make dreams happen together.

Dakota Ridge (Colorado) - Last year's NXR-SW results would suggest this is a bit of a reach, but this may be a seriously improved team over last fall. McKenna Spillar won the Colorado 5A girls 3200 this spring, and Dakota Ridge was a young team last fall. This could be a team whose time has come.

Flagstaff (Arizona) - This team may have underperformed a little at last year's NXR-SW race. They were young and lacking experience in that kind of race. They should be neither this fall. It would be fun to see a second Arizona team making a top ten showing. Flagstaff could be that team.

Park City (Utah) - Park City bypassed this meet last year, but it would be premature to take that as a long-term trend. They had a very good spring on the track and appear to be set up for a battle royal with Ogden for the 3A girls title in Utah this fall. Either team would be highly competitive in 5A as well.

Doubtless, there will be another team or two or three making a splash on the scene that I haven't even thought about yet. But, for now, this should suffice as an early look at the top contending teams. If you feel I've missed a rising team or two, please feel welcome to tell me about it in the comments section of this article.