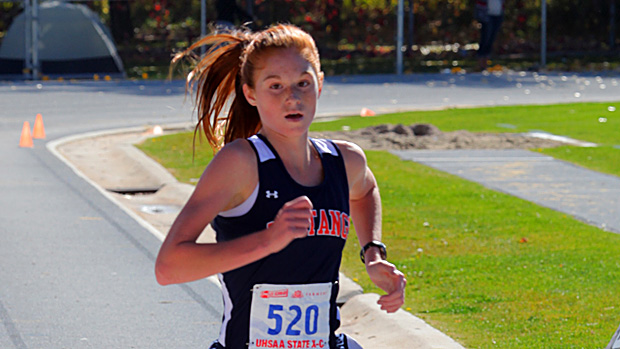 Tori Parkinson was the top finisher on a Mountain Crest team that stunned the world of 4A cross county in Utah. Photo by Kyle Perry.

There were some big meets around the region, but none bigger than in Utah, so that's where this week's review will start.

Utah, of course, hosted their state meet on Wednesday. Some things played out according to script, but a some did not.

Playing out according to script were the 5A team titles. Both Davis (girls) and American Fork (boys) won handily. Ogden's boys won 3A easily. So far as team results of regional significance go, however, that would be the end of the scripted results.

Among girls, both 3A Park City and 4A Mountain Crest posted better team times than 5A Davis. That's not necessarily to say that either or both would beat Davis in a straight-up contest, but it does suggest that Davis has some unexpected company at the top of Utah girls cross country. Mountain Crest was a big winner in 4A. Park City edged Ogden in 3A. Davis got some heat from American Fork in 5A, but not so much so from other sources. And so, both recent meets and the state meet itself suggest that the top five Utah girls teams are Davis, American Fork, Mountain Crest, Park City, and Ogden. There are other fine teams, but these are running the best right now.

For the boys, 4A had to go to a tie-breaker to separate Bonneville and Herriman. American Fork got by Davis by a good margin in 5A. Looking at overall team times, these four teams were clearly superior to the other teams in the field.

It was regional qualifying meet, and none of the big guns in Colorado were seriously threatened. Among girls, Pine Creek, Monarch, and Fort Collins easily won their regions and advanced to state. Among boys, Mountain Vista, Fairview, and latecomer to the scene Coronado won their regional meets. Cherry Creek won regional titles for both boys and girls. The Fort Collins boys also won a regional title. Surprises were essentially non-existent.

So far as Colorado is concerned, the above-mentioned teams would appear to be in line for championship race invites unless something falls apart at state this week. Several other Colorado teams should be in view for championship race berths, but much there will depend on how the state meet goes for all concerned and, of course, which teams register for NXR-SW.

In New Mexico there was one meet to rule them all, one meet to find them,. one meet to bring them all and in Rio Rancho bind them.

Except Los Alamos didn't show. So, apparently meets in New Mexico don't have quite the same drawing power as cleverly fashioned rings have in Middle Earth. Los Alamos took the week off in preparation, perhaps, to blow everyone out at their own home invitational. In any case, Los Alamos--and especially their boys--don't have a great deal left to prove in New Mexico.

But, everyone else on the NXR-SW watch list was at Rio Rancho. And the outcomes of these New Mexico meets are beginning to fall within a predictable pattern. Cleveland's stranglehold over New Mexico boys competition (at least when Los Alamos is absent) continues to tighten its grip. Each week, the Storm seems to have a little bigger gap on Albuquerque Academy. The rest of the schools have moved to a different area code. Eldorado has been nearly equally tough to conquer among the New Mexico girls. And there was no shrinking of the Eldorado gap this weekend.

Barring injury situations arising in untimely fashion, Cleveland and Eldorado look like the tops of the heap in New Mexico--with dissenting votes emanating from Los Alamos.

This weekend, in one last-ditch effort to resolve that issue, teams like Albuquerque Academy and Cleveland are headed to Los Alamos for the last big invitational of the season anywhere in the Southwest region. Providing the squads run full varsity rosters, we should get one culminating 4A/5A collision here before the titans go to their separate divisions for the state meet. Eldorado is not appearing on the list of teams attending the contest in Los Alamos, taking some, but not all, of the luster off of that race.

Since regional meets don't eliminate very many schools in New Mexico, higher powered programs can still ramp up a little for a meet like Los Alamos without worrying about the payback cost next week. The chances of teams like Cleveland and Los Alamos not advancing through their regional meets are infinitesimally small.

The Northern League had their annual convocation over the weekend. This would be more or less all of the large schools in the Reno/Carson City area. Among the boys, Galena was dominant. Among the girls? Galena again. The 1 - 5 gaps with both teams, however, suggest that Galena could be facing some rougher sledding when competition moves beyond their little corner of paradise in the shadow of the Sierra.

Regional meets take place this coming Friday and should tell us a great deal more about the shape of things in Nevada.

I did dig a signficant way through the haystack of Mt. SAC results in search of Nevada results of note, but found none. Please feel free to enlighten me if you know of some I overlooked.

Apparently, if you were an Arizona school in search of a big meet last weekend, you headed to Mt. SAC. And that is nothing if not a big meet.

The result out of that meet of most universal interest concerned Xavier College Prep. The Gators won the individual sweepstakes race. By way of comparison, California powers Great Oak and Simi Valley, both competing in the team sweepstakes race, ran superior team times.

And, somebody is bound to ask, since Great Oak and Simi Valley are California schools, what does it matter? The matter is this: NXR-SW at-large berths are determined over these very questions. It's tough to lobby for SW representation in the at-large selections if SW teams don't take top honors at large, inter-regional meets like Desert Twilight and Mt. SAC. For Xavier, arguably a flagship program in the Southwest, we now have a split decision. And that complicates matters in the selection process.

I don't think Xavier is planning on finishing as low as third at NXR-SW, but, in the event they do, the Mt. SAC result could turn around to bite them. It could bite another SW team that finishes close to, but behind, Xavier at NXR-SW. We'll see. It is just one of those little facts that may or may not turn up with unanticipated importance at a later date.

Among Arizona boys, Catalina Foothills also had a nice result at Mt. SAC, winning their particular race with an average team time of 16:44 over 2.93 miles of challenging terrain.

I couldn't find much within the borders of Arizona itself that's going to turn many heads. Like Nevada, Arizona has state qualifying meets coming up this weekend, so we should see most of the top teams running full varsity squads this coming weekend.