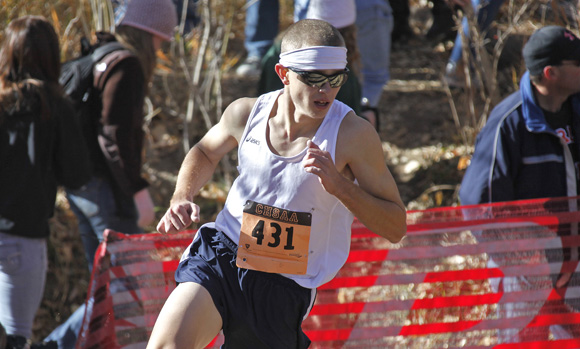 Garrett Coles rounds the turn at the creek crossing en route to a third-place individual finish. Photo by Jeff McCoy.

The recent history of University cross country was missing something. Something big.

They fixed that issue on Saturday with a big trophy, one that says "Class 3A State Champions" across the bottom.

There have been some ups and downs for this team this season. Moments of overwhelming promise and moments where it seemed that the team was just a half-step away from seizing the opportunity scampering through the 3A neighborhood.

They had just enough of the magic working on Saturday to be the team coming out on top. It didn't come easily.

When the field had broken up enough to start sorting things out at the mile. Garrett Coles was sharing the lead with Jeff Switzer of Estes Park, Anthony Thomas of Brush, and Erich Hixson of Holy Family. Dan Eberhard was among those in the next tier of runners back, the main chase pack. Garret Roberts and Isaiah Dilka were only slightly back of Eberhard.

University had negotiated the first mile in a strong position, leading the pack of 3A teams. But, leading at the mile can be dangerous business on this course.

Meanwhile, the acknowledged main competition for University, Peak to Peak, was running incognito. The singlets read "Peak to Peak" across the front, but these were not the Black Cloud singlets we had seen earlier in the season. Theses uniforms had the distinct look of a set retired several years ago, certainly enough to defy easy recognition. On top of that, Peak to Peak was clearly laying back and stalking. Playing a similar game of patience was Frontier Academy.

And, so, the table was set for a serious game of fox and hounds to the finish, with University stuck in the role of fox.

By the time the race made its way back to the main course intersection, Anthony Thomas had completely separated himself from the field, and Platte Canyon's Jacob Benson--a seasoned veteran of rigorous courses--had taken over sole possession of second. A couple of hundred meters later, they would finish that way inside of the stadium.

Coles came out of the woods in third, closely pursued by Josh Davis of Lamar. But, the nailbiting season for the University faithful had just begun.

Frontier's Chris Baker came out of the woods in eighth, showing that he had made up some serious ground around the back side of the course.

Garret Roberts came out of the woods shortly thereafter in a cluster that included Frontier's Chibuikem Nwizu and Peak to Peak's Rodenburg brothers. Suddenly, everything appeared clouded, just as it had all season long. University held a narrow lead by virture of Coles' high position but there was nothing remotely resembling certainty about the overall outcome.

And, if things were to play out according to the established form of the season, this uncertainty indicated that the advantage belonged to Peak to Peak, as the Pumas owned the pack strategy credentials in this group.

But, ownership is transferable. And, somehow the Bulldogs had laid their paws on the goods.

While Coles and Roberts were the setup guys, it was the finishes of Dilka and Eberhard, the latter struggling a little at the end perhaps due to an aggressive early race, who would seal the deal for University. University scored 22 and 34 at 3 and 4, compared to 19 and 37 for Peak to Peak and 25 and 43 for Frontier. There would be no overtaking of University on this day.

The final margin was relatively narrow, 14 points over Peak to Peak and 22 over Frontier Academy, but trophies aren't inscribed with asterisks. Margins of victory are for quibblers.