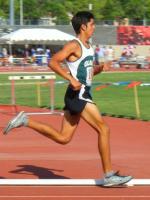 Track and Field Program Welcomes 34 to Roster - Air For...
Air Force track and field head coach Ralph Lindeman announced the addition of 34 cadet-athletes to the upcoming season's roster, as classes began this morning (Aug. 8) at the Academy. The newest class...

Colorado Track XC 4A All-State...
Auston Tribble&#39;s big win in the 300 hurdles catapulted him into a spot on the 4A All-State team. Photo by Alan Versaw....

State Prognositicating: 4A Boys...
Valor&#39;s Spencer Jamison comes in as the top seed in the 400. Photo by Alan Versaw....

4A Boys at Spring Break: Every Bit as Good as We Though...
Daniel Belk&#39;s 400 speed adds a lot of heft to Cheyenne Mountain&#39;s bid to become the dominant 4A boys team this spring. Photo by Alan Versaw....

A Good Call to Move Up...
Daniel Lara finishes the 4x800 for Thompson Valley. The Eagles ran a very solid 8:22.99 to lay down the season&#39;s first gauntlet in that event. Photo by Kenny Regan....