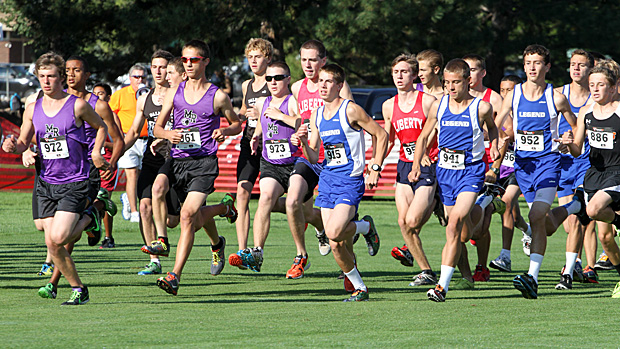 Once the dominant region of Colorado high school cross country, Pueblo has slipped from the lofty perch it held in the 60s and 70s. But, there are signs here and there of revival in the steel city and points nearby.

It took a tag-teaming effort from Jefferson County powers Wheat Ridge and Green Mountain to wrest state supremacy from the hands of the Pueblo schools in the late 70s, but that supremacy has yet to find its way back to Pueblo.

Winner of seven state titles (including five consecutive) from the mid 60s to the mid 70s, the Bulldogs have the most serious cross country tradition of all Pueblo-area schools. More recently, names like Jenna Bimbi, Jessica Driscoll, and Lauren Dorsey-Spitz have risen to the upper echelons of 4A girls cross country, but the most recent years have been leaner years as Centennial looks to regain some of their former glory.

Pueblo East won the first girls state cross country title in 1978 but haven't been back to that height since. Heather Loseke was the last Eagle to take a place among the state's leaders about 10 years ago.

Pueblo Central, Pueblo County, Pueblo South, and Pueblo West have enjoyed some excellent teams over the years, but none has ever risen to the height of state champions. Pueblo West has enjoyed, by far, the most recent success of any of these schools, as the Cyclones seem to be a permanent fixture near the top of 4A boys. Mike Schmidt and Mike Cernoia were pioneers in the development of Pueblo West's success and the tradition has continued unabated since their time.

To the west, Florence won girls state titles in 1987 and 1988 and maintained a status as one of the best small school programs in the state for about a decade. Canon City claimed their lone state title with their boys team in 1998. The last 15 years have been lean years for both Fremont County programs.

On an historical note, Cotopaxi (several miles up the canyon from Canon City) once had a powerful cross country program, winning a state title in 1958 and coming close a few other times. Alas, the last cross country meet held at Cotopaxi was in 2000. Interestingly, the school hosted a meet that last year without having a team to compete, thus honoring the place on the schedule that their meet held for the handful of schools that had signed up for the meet. The first-year program at The Classical Academy was one of those schools.

More reently, Dolores Huerta fielded a small cross country team but never got the training wheels off before the program folded.

After years of running meets along the Canon City Riverwalk, Canon City opted for the grandest of all possible water crossings and moved their meet to the Royal Gorge last fall. They've scheduled it there once again for this fall, so apparently they mean for the move to be permanent. Perhaps the bear-shortened course of 2009 provided some impetus for moving the race to a place where cantankerous old sows are less likely to hang out.

In any case, the Canon City Riverwalk is now a pretty decent cross country venue in search of a meet--well, at least a high school meet. The middle schools in Canon City still use the course, I believe.

Florence has been hosting their meets at Pathfinder Park a mile west of town for several years now. The course is flat and fast, but conditions are sometimes a little toasty there in early September. Being a Tuesday meet, it's become a meet of choice for local schools trying to load up on meets so that their transfer rule students can become eligible more quickly.

The Cadillac and granddaddy of all Pueblo-area meets is the Pueblo Central Invitational at Elmwood Golf Course. For a brief while, Pueblo East ran a meet at the same venue, but it didn't have the drawing power or the staying power of the Pueblo Central meet. For a period of time, the Pueblo Central meet floundered and seemed in danger of closing up shop, but seems now to have regained its footing under new and enthusiastic meet management. And, the present meet management has seen the light about the importance of hosting JV races in conjunction with the varsity-level event.

For those who have not been there, the Elmwood Golf Course is a delightful cross country venue, some shady stretches, some trail, some grassy stretches, maybe a bit too much asphalt, but overall a nice place to host and watch a good cross country meet. The course is the site of the state course they kept coming back to in the 70s, 80s, and 90s. The one gnawing problem with this course as a state venue is that the course runs on two sides of a quite substantial irrigation canal. There is but a single, narrow bridge spanning from one side of the canal to the other. Parking may also have become an issue in recent years as the number of people attending the state meet has increased immensely, but not so the number of available parking spaces in Pueblo's City Park where the golf course is located.

But it is still a splendid place for an invitational meet.

Probably the most memorable snowstorm postponement of a state cross country meet took place at Pueblo in the fall of 1997. For those inclined to think of Pueblo as the state's perpetual banana belt, the account of the aftermath of this blizzard should rate as a must read.