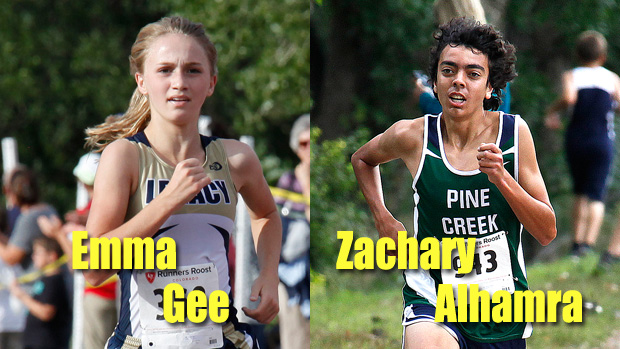 Emma Gee and Zachary Alhamra found themselves setting their own paces at Liberty Bell, and they did it well. Photos by Jeff McCoy.

It has been a difficult week for Colorado.  Devastation from unprecedented flooding in the Boulder and Loveland areas has been felt all around the state and the repercussions could even be seen in the world of high school cross country.

This was the weekend of the highly esteemed Liberty Bell Invitational.  The blazing fast course always makes for a great show with tough competition and astounding times- it’s always an early highlight in the cross country season.  But according to the invitational’s fastest male and female finishers, who are also Colorado Track XC’s athletes of the week, some of that traditional Liberty Bell magic was gone this year.
“It was a really good course as usual,” said the fastest female finisher, Emma Gee, “but something wasn’t there that’s been at Liberty Bell in the past.”
And according to the top male finisher, Zachary Alhamra, “the size of this year’s Liberty Bell was significantly smaller than prior years. The starting line was a lot more thin than it has been in the past.”
Due to the personal devastations and road closures by the floods, many of the competitive Boulder and Fort Collins area high schools were unable to make it to the race.  The cast may have been smaller this year, but Emma Gee and Zarchary Alhamra still made an exciting show out of Liberty Bell.
Emma Gee, a junior at Legacy High School, won the Division 1 race finishing in a time of 18:04 and posted the girls’ best time of the day.  “I knew we were going out slower than usual,” said Gee, “so when I picked up the pace and took over the lead it felt good to know that I could hold that pace even though no one was there with me. A good runner should be able to hold a fast pace alone.”
Gee, however, has established herself as much more than just a “good” runner.  She has had a strong past year of running, qualifying to compete as an individual at Nike Cross Nationals last season and finishing 5th in the 3200 and 4th in the 1600 last spring at the 5A Track & Field Championships. That success last year has translated into high hopes for this year.
“I feel a little bit of pressure coming off a strong year but it has helped me to set my goals even higher,” said Gee.  “It was a really great opportunity running at Nike Nationals but that wasn’t something I was training for.  I’m focused on peaking at the right time this season.
For Gee, her race at Liberty Bell is confirmation that her season is going as planned.  “I’m hoping to peak later this season,” said Gee.  “This year I am looking at nationals and want to do big things there. I may not be clocking the fastest times right now but I’m going to get faster as the season continues.”
For Zachary Alhamra, his race at Liberty Bell was an extremely positive experience.  The junior from Pine Creek High School won the Division 2 race in a sweet time of 15:31 and also posted the fastest boys’ time of the day.
“From the start of the race, I knew it would be a good one for me,” said Alhamra.  “I just got into that rhythm early on.”
Alhamra used a strategy similar to Gee’s, holding back with the pack early on then taking over the lead and sustaining a hot pace all on his own.  “Running alone was a challenge,” said Alhamra.  “You can get lost not having someone to spur you on but I did a good job of pushing myself to obtain the time I wanted.”
Alhamra has been a well known name in the running scene ever since his freshman cross country season.  He had a standout debut year only to hit a plateau his sophomore year.  “I was going through some physical changes,” said Alhamra, “I grew six inches and that really affected my ability to improve.  I’ve been trying to catch up with my body really.”
But this season, Alhamra appears to have caught up.  “This one has proved to be the consummate season of high school so far,” he said.  “It’s a relief because there were times last year I lost touch with my self confidence in being able to be one of the best runners in the state. But this season so far has really opened my eyes again to how talented I am as a runner.”
This last Friday was a huge confidence booster for Alhamra. He’s feeling fast again and is also taking a new approach to his racing.  “My last couple seasons have always been about what time I’m going to run each race,” said Alhamra.  “I always had this systematic way of making a goal for myself and doing everything in my power to run that time.  But this year I haven’t been focusing on the times I want to run. I get pre race anxiety and doing so has helped calm my nerves. So this Friday I knew I was expected to win or place high and I just didn’t let that faze me. I told myself what happens happens, and I’ll run this by how good I feel.”
It appears that Alhamra was feeling very good.
As the recovery process continues in Colorado, Colorado Track XC sends out best wishes to the victims of the floods. Hopefully this week will restore some normalcy to the communities that were affected and runners can get back into their training and racing routines. Congratulations once again to Emma Gee and Zachary Alhamra on their impressive performances under some unusual circumstances and best of luck to them as they continue on.
Tweets by ColoradoTrackXC