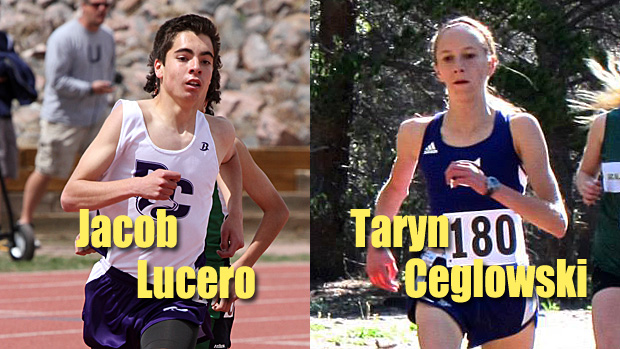 For Jacob Lucero and Taryn Ceglowski, last weekend was a weekend of breakthrough triumphs. Photos by Alan Versaw and Vince Stack.

Every new season brings fresh faces. They come from the new batch of freshmen and also from returning athletes who have made leaps in their training through the summer months.
Some of the leaders who were familiar to everyone last year, may not be at the top of the pack anymore- perhaps they graduated, perhaps they’re injured. Every new season is a fresh start that brings an opportunity for new athletes to rise to the top.  Our athletes of the week this week include two of these fresh faces who are new to the pack of leaders of the 2013 cross country season.
On the girl’s side, Colorado Track XC honors Taryn Ceglowski as the female athlete of the week.  The freshman from Salida High School won the challenging Lake County Invitational this weekend in a time of 20:48. It was a very hilly course, staged at a staggering elevation of 10,000 feet.  This invitational was not for the faint of heart.
“I feel really good about my race,” said Ceglowski. “I just started out with the pack, moved ahead on the second lap and took off. I could tell it was definitely harder to breathe and the hills were long and gradual but I pushed through it.”
Ceglowski may be new to the high school scene but she’s definitely not new to running. Last year, her middle school cross country team won the state championships.
Now as a freshman in high school, Ceglowski is loving the bump up in racing distance and leading the way for her new team. “It’s definitely a big change from junior high, but it’s great,” said Ceglowski. “I love my team. They are a really fun group of girls and we push through every meet together.”
Ceglowski’s team is looking very impressive so far this season. The Salida girls won the invitational defeating Coronado, a well-established 4A girls team. It’s been a strong start and the girls are already looking towards that coveted team championship at state.
“Our goal is to place first at state,” said Ceglowski. “It will be a challenge but it will definitely be fun. We all love to compete, but we all like to go out there and have fun.”
And, no doubt, the double individual and team win this weekend meant double the fun for Ceglowski.
For the boys, Jake Lucero ran away with the athlete of the week title. Lucero won the Cherry Creek Invitational this weekend in a time of 16:18.  Although he’s a senior this year running for Douglas Country high school, Lucero has recently rebounded from injuries, had a breakthrough in his training and is another new name on the cross country scene.
“There was some good competition out there,” said Lucero. “There’s always good competition when you have Cherry Creek and Arapahoe out there.  I pictured myself being in the top group, but I didn’t expect to win it so I was really excited.”
If you look up Lucero’s name, you won’t find much to go off of that would have projected such a successful start to his season.  He ran a few decent 1600 and 3200 times last season in track but because of injuries, he didn’t make it to the state competition. “I just got hit with unfortunate events last year,” continued Lucero.  “I was injured a lot and was looking for a really good bounce-back season.”
After recovering from his injuries, Lucero looked forward to this season and got some strong summer training under his belt. “I put in close to sixty miles a week and trained hard through the pain,” said Lucero. So far, injuries haven’t seemed to pose an issue and Lucero appears stronger than ever.
With a fourth place finish last weekend at the Arapahoe Invitational last week and now this impressive win behind him, Lucero seems to be getting the bounce back that he wanted.  “I’m surprised to have started off this well,” Lucero said. “But I’ve been working hard and I think that’s showing.”
So this week, Colorado Track XC honors a pair of fresh faces.  Congratulations to Ceglowski and Lucero on being selected as the athletes of the week and best of luck to them as they continue to make a name for themselves this season.
Tweets by ColoradoTrackXC