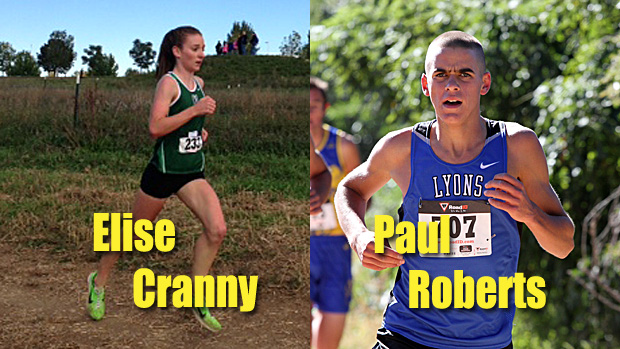 Elise Cranny and Paul Roberts ran to big wins in their respective conference meets on Saturday. Photos by Sandy Cranny and Alan Versaw.
It's become something of a recurring event by now, and it’s time for Elise Cranny to be honored again as the Colorado Track XC female athlete of the week.
From her very first high school cross country race, it was clear that Cranny was going to be a talent but the heights to which that talent would take her was something even she wasn’t expecting.  Multiple state championships, a handful of national appearances, and even a national title later, Elise Cranny has now begun her final year as a high school runner in Colorado.
And what a start to her senior year it’s been.  Last weekend Cranny won the Northern Conference meet at Fossil Ridge High School in an astounding time of 16:45.
According to Cranny, that time was something she wasn’t expecting.  “I really didn’t think about running a fast time at all,” she said.  “I wanted to do Liberty Bell this year because I thought it’d be my only chance to go under 17 so when the team didn’t go to that meet, I thought I wouldn’t be able to do it.  I’m just really surprised.”
As far as we have been able to discern, only Melody Fairchild ever ran faster in high school on a Colorado course.  Cranny is one of the fastest cross country runners to ever come through the state of Colorado.  It’s something she can’t yet comprehend.  “It just hasn’t sunk in,” she said.
Cranny is running in a league all her own so to get some comparable competition she raced at CU’s Rocky Mountain Shootout last weekend.  As a high school student, Cranny raced against college athletes and won.  “It was really fun to run against them and the athletes pushed me a lot,” Cranny said.  “It’s fun to have high competition and race against new people.”
Consistently fast and consistently improving, Elise Cranny has had a dream of a high school career.  So, who gets the credit? “My coach Jason Hartmann,” she said.  “Ever since I was a freshman he told me it would be a process and take a long time to improve.  He’s definitely given me the training with the long term approach so I can keep improving.”
So as expected, this season is faster than the last.  The goals for the rest of the season include another state title and an improvement from her 7th place finish at Nike Cross Nationals last year.
And of course as a senior, the college search has begun.  The top contenders: “I’m mostly looking at Stanford, CU, Oregon, and Georgetown,” she said.
Faster than ever, the future is looking extremely bright for Cranny!
Paul Roberts of Lyons High School is Colorado Track XC’s male athlete of the week.
Roberts has been on a bit of a winning streak recently.  Last weekend he won the TCA Invitational in 15:59 and now most recently he won the Patriot League meet on Saturday in a time of 16:04.
“It was really windy out,” said the sophomore about the race in Sterling.  “We were all trying to run fast but we didn’t think we’d get great times.  I would have loved to get my school record of 15:44 that my brother has but I haven’t been able to run as much recently because of an injury so I’m really happy with my race this weekend.”
Another highlight to Robert’s race on Saturday was leading an impressive team finish.  The Lyons boys went 1, 2, 3 and 5 for first place with a mere 11 points.  “We’re a really close team and we’re all really good friends, more like family really,” Roberts said.  “It’s great we’re running really well this year and it’s great to be on the team.”
As mentioned, Robert’s season had a slow start as issues with tendonitis set him back a few weeks.  This was an important race for Roberts, serving as validation that he’s back on the right track.  “I’ve only just been starting to get back into running after biking for the past couple weeks,” said Roberts.  “But my legs are fresh and I knew I could run fast.  You just gotta deal with whatever happens.”
Robert’s is back on pace and stronger than ever.  As last year’s 2A state champion, Robert is looking for another top state finish.  “I just want to go out there and give a great effort to the best of my ability for God,” Roberts said.  “I know I have a good chance of winning and I have confidence but there’s good competition in 2A this year.”
No doubt, there’s been amazing competitors throughout the entire season this year.  Congratulations to Elise Cranny and Paul Roberts for standing out from the rest of them and being honored as Colorado Track XC’s athletes of the week.  With a little under three weeks now until the Colorado State Cross Country Championships, remember to embrace your competition and feel inspired by your competitors!