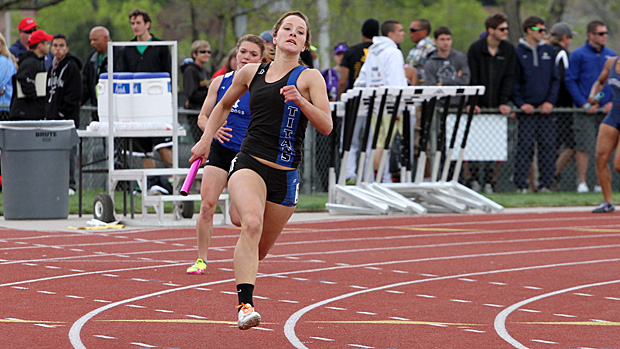 Looking at the heat sheets for Friday it was easy to see that nobody had firmly taken command of the meet yet. All of the teams in contention needed to make some serious progress in order to further their goal of finishing the season on top. A few of them did exactly that.
TCA's boys continued toward their goal of taking home a title by putting Jonathan Roy and Alex Miller in the finals of the 300 hurdles on Saturday. Ryan Younggren from Holy Family and Andy Bowles of Coal Ridge stand between these two and a state title. Freshman Sarah Yocum from Faith Christian qualified for her fourth final of the meet with the top overall girls’ time in the 300 hurdles.
In the 800m sprint medley finals, Eaton blasted the competition as well as the old 3A record. The team of Emily Naill, Jayla Jarngin, Brittany Pierce and Allie Hodgson took the record away from the 2012 TCA team with a 1:48.14 effort.
Both the boys’ and girls’ 800s held a lot of suspense and a bit of surprise. Kelsi Lasota from Estes Park outkicked Lauren Hamilton from TCA for the girls 800m crown.
Robert Delfeld of St. Mary’s did not come into the boys’ 800 as the favorite, but he finished atop the podium nevertheless with a withering kick down the finish straight. Delfeld on the surprise: “All the credit in the world goes to my coaches. Everything I have is from them.” Dominic Carrese from Fountain Valley and Luke Yeager from Faith Christian rounded out the top three, both well under 1:57.
When the 4x200 finals rolled around, the usual suspects were out in the center lanes. Coal Ridge was the girls’ winner ahead of TCA and Moffat County. Manitou Springs boys missed a new classification record but still collected a convincing win over TCA and Coal Ridge.
The top four boys teams in the meet promised to meet each other for a team mile as Manitou Springs, Coal Ridge, Frontier Academy and Classical Academy each made the final of the 4x400. Coal Ridge brings the top qualifier to the final for the girls’ version of the 4x400.
Junior Austin Williams from Cedaredge totally dominated the shot for a win by three feet, “All the years of hard work are paid off today.” Seniors Tyler Trout from Lamar and Nick Paradiso from Trinidad joined Williams in the fifty-foot club on the podium in second and third.
Getting a wind legal jump proved to be pretty difficult at the triple jump area. Jazmin Montes from Platte Valley came out of the wind tunnel as the winner surfing a 3.8 breeze to a 35-9.5 jump and the state title. Abby Mangham from Bennett trailed at 35-6.75.
Andrea Willis of TCA proved herself as the best in the classification this, and any year, Friday afternoon. Willis pushed the 3A state record to 11-6. Fellow Titan Hannah Carr likewise set a new 3A record in the discus, floating the metal frisbee out to 143-9. That throw came of the heels of a 141-8 effort from Summer Eberhardt from Lamar who tiedl the old state record with the effort.
The Classical Academy girls made steady progress toward their goal of repeating as the state champion on Friday. With nine events scored, TCA started to pull away a little from the crowd pushing their point total to 58 on Friday. Sitting behind them in second is Eaton at 34.5, followed by Lamar and Estes Park, both at 32. If the Titans will be caught, it will only be at the price of a considerable effort.
When the sun set on Friday, the Wolverines of Frontier Academy were in the lead in the team race with 35 points over the 30 of The Classical Academy. Manitou Springs and Coal Ridge are tied at third with 22 points. Nothing much about the state race is settled, however, as each team has some pretty heavy representation in Saturday's finals.
Tweets by ColoradoTrackXC