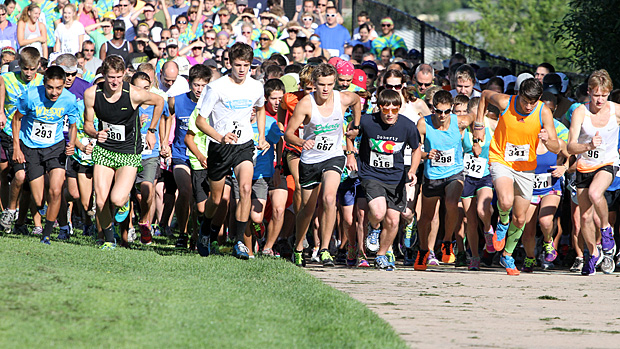 A crowded field surges off the start line at this morning's Run for Rwanda. Photo by Alan Versaw.

There's a sense in which cross country season begins in Colorado Springs with the Run for Rwanda. It's an almost cross country kind of course. The race allows high schoolers to register for $5, and each year a few more high schoolers show up. This year, Rampart, Vanguard, Evangelical Christian Academy, Air Academy, The Classical Academy, Pine Creek, Doherty, and Widefield all had runners competing in the event.

And, it was arguably Widefield who made the biggest statement at this meet. Max Martinez paced the Widefield undergrads (a couple of Widefield alumni were present in the field as well) with a 17:54. Matthew Arbegast rolled through in 18:20, and Mason Durfey in 18:29. Widefield coach Erik Nelson was smiling, and rightly he should have been. Widefield has the look of a much-improved team over 2013, and that should help to tighten up a regional contest about mid October.

The Classical Academy plucked a couple of nice places with Everett Johnson finishing in 17:23 and Tanner Norman in 17:47. Colton James-Wells of Doherty finished in 19:12. Andrew Wireman got Discovery Canyon started in 19:22.

For the girls, the high school pace was set by incoming Air Academy freshman Lilliana Hamilton at 20:53. Beth DeLaurell wasn't far behind at 20:29. Claire Brockway and Casey Griggs were next at 21:53 and 22:20, respectively.

For those wondering what to make of the times, the course runs a lot like cross country. The course splits fairly evenly between concrete sidewalk/bike path and crushed rock trail, with a very short portion of deep park grass. The course is mostly level with a slight east-west gradient.

Elsewhere in Colorado Springs this morning, a few other high school notables were running a two-mile event on the crushed rock trails of Monument Valley Park. Some of the names of current high schoolers you might recognize would include Miles Hatton at 10:57, William Schenk at 12:38, Amanda Eubanks at 13:49, Caleb Kimble at 11:44, Harley Morgan at 11:07, William Mayhew at 10:15, Clay Rahaman at 12:32, and Tyler Gard at 12:02. For the most part, Vanguard was better represented at the Nielson Challenge than the Run for Rwanda.