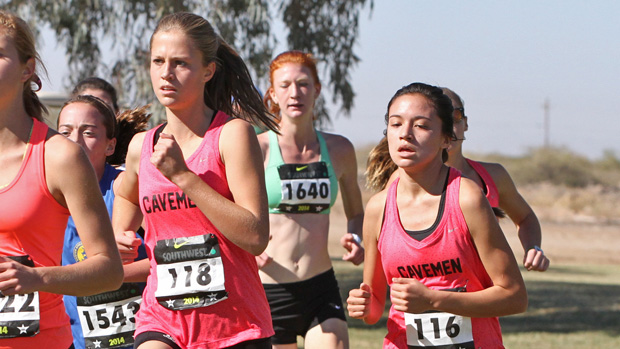 This could become habit forming.

American Fork swept the Utah 5A state titles four-and-a-half weeks ago. Today, they took on a much larger collection of top teams and emerged doubly victorious once again. For the first time ever, the American Fork boys will be in Portland with a group of people they see pretty much every day.

Although American Fork did sweep the team titles, the boys' part of the bargain didn't come nearly as easily as expected.

Things were looking very good for the Cavemen through the first three runners. Casey Clinger, Zac Jacklin, and McKay Johns placed fourth, seventh, and tenth respectively. Only two other scoring teams had even one other individual among the top ten.

The rout was on, or so it seemed. But, there are a few schools in Utah that have dealt with American Fork before--most notably Davis.

And Corbin Talley's team was not long in responding. Josh Ward claimed 13th, and the #6 team scoring position. Following Ward were Stockton Smith (17th), Logan Mackay (20th), Cameron Todd (40th), and Colton Rimann (43rd). Although they didn't know it at the time, the Davis team tally had stopped at 75. Between Todd anbd Rimann, American Fork slipped in their #4 in Joseph Simmons. But the American Fork #5 was still to be seen.

Jacob Chase eventually crossed in 54th, at 15:49 (meaning, among other things, that the top fives for both American Fork and Davis all finished in 15:49 or faster).

At the time, few realized how close the team tally would be, but when the dust had settled, American Fork had won its sixth-consecutive NXR-SW title by the most slender of margins--three points. It was easily the closest Davis--a team that had struggled at moments during the state-sanctioned season--had come to American Fork all season. But, great teams are made for the championship season, and nobody who's been around NXR-SW for a while would call Davis anything but a great team.

Adding a few exclamation points to the Utah domination of the boys side of NXR-SW were Timpanogos in third and Desert Hills in fourth. For Timpanogos, chances for an at-large bid seem within the realm of reasonable. Desert Hills gets to practice for another week, but with much thinner hopes of seeing Portland this year. Mountain Vista out of Colorado was the first non-Utah team in fifth.

The girls championship race had a few extra degrees of temperature, suitable for what promised to be a hotly-contested team title.

Of each of the big five girls teams, however, only American Fork came to the awards ceremony with momentum. Each of the other four knew that significant pieces of what they had hoped would come together today had failed to materialize. And, even American Fork held their breath a little over an uncharacteristically large 3-4 gap. But Cami Squires, Sammy Hollingsworth, and Nikki Smith provided AF with just enough margin up front to keep things together even when 4 and 5 weren't as close as they had been all season.

For #2 Desert Vista, the early mood out of the team camp was one of bitter disappointment. The team that had been so dominant all season long didn't have the aura of invincibility today. Yet, like American Fork, they had just enough to advance. Dani Jones ran to fourth, Baylee Jones to 19th, Amanda Davis to 43rd, and then a few moments of nail-biting as the Thunder waited for 4 and 5 to arrive. The team that had structured their training on peaking for NXN had several painful minutes of anxiety before learning they had indeed survived to run again.

Davis, possibly still a little nicked up from injuries incurred earlier in the season ran to a strong third, but the disappointment of waiting another week to find out if they make it to Portland was weighing heavily on several girls' countenances as their third-place finish was read aloud to the waiting crowd at the awards ceremony.

Whatever disappointment Davis may have felt, however, was multiplied in the case of Monarch and Fort Collins. Fort Collins is definitely out for this year's NXN, while Monarch clings to the slender hope of the Southwest region being awarded a second at-large bid. Health has been a part of the story for both teams in the aftermath of their state meet four weeks ago.

Both individual races were as full of drama as the team battles.

For the boys, it was nearly three miles of leadership by committee. A fairly patient first mile was followed by a bit of a quicker second mile that trimmed a few folks off the lead group, but did little to change the fact that there was nobody was able to establish a clear lead over the remainder of the field. 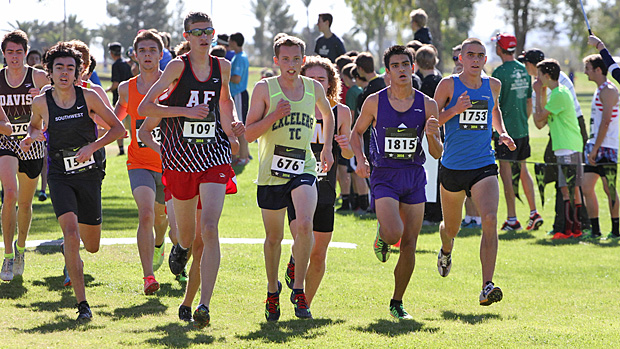 At about two miles, the lead group had dwindled to Zach Alhamra, Zac Jacklin, Casey Clinger, Eric Hamer, Josh Collins, Carlos Villarreal and Paul Roberts (photo, above, by Alan Versaw). In the final mile, only Alhamra would drop from the pace. Almost simultaneously all five would go for broke with about a quarter mile to go. In the one great final to the finish, Collins would find more in the tank than the others, leaving, in order, Villarreal, Hamer, Clinger, and Roberts in his wake.

Although the girls race had its moments of packing up front, and especially so between miles one and two, the race was characterized more by a trading off of the lead.

Lucy Biles set the early pace, and eventual winner Katie Rainsberger would credit Biles with keeping the pace honest in the early going. Once the field caught up with Biles near the mile, however, nobody seemed ready to be the next to lead until a little past that point.

It was that moment that Lauren Gregory chose to make a breakaway bid. The ploy nearly worked as nobody went with Gregory and her lead reached a margin of about 30 meters before Katie Rainsberger made her final push to see is she could reel in Gregory's break.

With about 800 meters remaining, Rainsberger noticed that she was gaining on Gregory and hope sprung to life where little had existed before. It would not be until the last 100 or so meters on the grass, however, that Rainsberger would overtake Gregory and relegate her to second.

In a twist on the usual Arizona script, Rio Rico sophomore Allie Schadler went by Dani Jones for third. Early leader Lucy Biles would settle for fifth and an NXN berth.

As a footnote on the individual qualifers, both Collins and Gregory opted to run Foot Locker races on upcoming weekends and declined their NXN berths. Rounding out the list of NXN individual qualifiers, then, were Courtney Wayment and Alyssa Snyder for the girls, and Alek Parsons and Tyler Day for the boys.