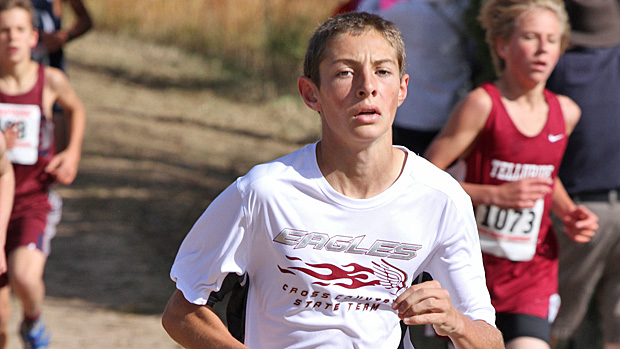 Once this weekend is done, we're pretty much down to low-key road races for the rest of 2014 and at least a full week into 2015. But, there's a lot of this weekend to get done first.

If you're a fan of the running sports here in Colorado (you are, or you wouldn't be reading this article), you won't be lacking for items of interest this weekend.

The Air Force Academy gets an early start on things today with the Air Force Holiday Open. There is a smattering of collegiate athletes trying to work out a few kinks here--athletes from Colorado, Metro State, Adams State, Fresno State, and the Air Force Academy, but this meet will be just as much about opportunities for club and unattached athletes. A very large number of those club and unattached athletes come from the ranks of current high school athletes.

As a result, the main emphasis of our Colorado Track XC coverage this weekend will be on the Air Force Holiday Open.

But, it's far from the only meet going on.

Colorado School of Mines hosts their Alumni Open as a two-day affair on Friday and Saturday. While this one will have a few open and unattached athletes of its own, it will be closer to a pure college meet than the Air Force Holiday Open. Several DII programs will be bringing at least partial rosters to this one to compete. And, there do appear to be a few current high schoolers registered for this one as well.

We'll be posting results for all three indoor track meets as they become available.

The cross country meets of interest this weekend span from coast to coast, with a couple stops in between.

In Myrtle Beach, South Carolina, the USATF Junior Olympic National Championship Meet rolls around and over the Whispering Pines Golf Course. There will be only the thinnest of Colorado high school representation for the pines to whisper about, but Colorado is a bit better represented in the 13-14 age group category and on down. A few of the names you might recognize taking the course would include Calvin Banta, Gage Voss, Sean Decker (actually, Mr. Decker is already a high schooler), Mackenzie Moss, Chantae Steele, and Alayna Szuch. We'll post a summary report on these individuals sometime on Sunday.

Closer--much closer--to home is the Fastest Coach in the State race. That one is in Lyons on Saturday. We've already talked about this one at length. If your travel budget for Saturday is limited, this is where you want to be. You could even catch all the action in Lyons and still make it for a large portion of the events at Colorado School of Mines. And, Colorado Track XC will be in Lyons as well--bringing you the blow-by-blow of the morning's race as only Tim Hilt can. Look for photos and written coverage to appear beginning on Saturday afternoon.

And, lastly, there would be a race in San Diego, California, known as the Foot Locker National Championships. Lauren Gregory turned down an opportunity to run at NXN to be here, so it's safe to figure this one should be pretty good. We'll leave it to MileSplit National, however, to provide the overwhelming bulk of the coverage on this one. We'll link stories involving Lauren Gregory to the Colorado front page.