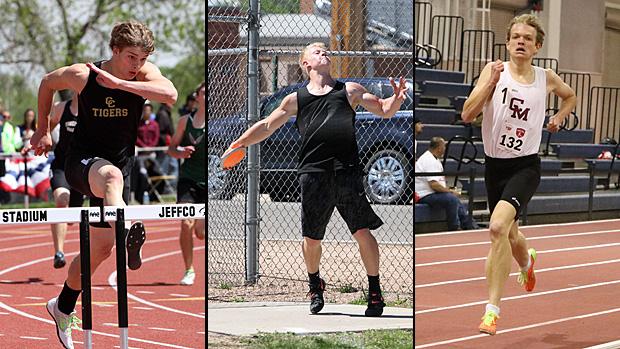 Which event will be toughest this spring--the 300 hurdles, discus, 800, or some other event? Colorado Track XC file photos by Alan Versaw.

Jeff Bliven's comment on the forum today about the possibility of Colorado's first sub-1:50 800 this spring got me to thinking: What will the toughest event in boys high school track and field be this spring here in Colorado? So, let's take a look.

It goes without saying that the 800 is shaping up as a very tough event this spring, so we'll start there.

If you've been paying attention this winter, you know Cheyenne Mountain's William Mayhew has run 1:53-point and 1:52-point at two out-of-state meets. We could discuss the advantages and disadvantages--in general--of running out-of-state 800s, but Mayhew's latest effort was in Albuquerque and was, for all intents and purposes, a solo effort. There was absolutely nothing advantaged about his 1:52.82.

But, Mayhew is far from the only dog in the fight. Smoky Hill's Blake Yount returns off a season where he set the Colorado all-time record in the event at 1:51.63.

Let's hope these guys get to see one another a little during the season and that they're successful at clearing traffic and setting good, crisp paces. A sub-1:50 is not out of the question.

Traffic isn't an issue with outdoor 400s as it is with 800s. We do not appear to have any Kevin McClanahans in this year's field, but it's still a very tough field. 4A and 5A boast loaded fields and state places will be at a severe premium, but the small schools are fields of opportunity at this distance for this spring.

While we may not have anyone in the field ready to make a serious run at Brent Vaughn's 9:05.89 record on Colorado soil, this could get very interesting.

One early-season opportunity at a great showdown has been hijacked by World Cross Country. Both Palmer Ridge and Lyons figure to be at the Longmont Invitational on March 28, but Eric Hamer and Paul Roberts will be in China, running on a slower surface and competing over a greater distance than anything on the track at Everly-Montgomery Field.

But, both Hamer and Roberts seem capable of reaching times in the 9:10 - 9:20 range this spring. Some of the others who will be giving chase include Ben Butler, Dominic Compoz, Zach Alhamra, Satchel Caldwell, Marcelo Laguera, Keaton Schelir, Dylan Day, Tyger Roch, and Paxton Smith. Smith has looked exceptionally good in a couple of winter outings and may be ready to leapfrog a few folks in the order. Some others in this crowd lost some training due to injury and the jury is still out on how their 3200s will turn out this spring.

Trenton Stringari and Triston Sisneros lead the pack at 38.20 and 38.21, respectively. The only bad thing about that is that the two won't get to face each other at state.

We can hope these guys get to race one another with some frequency. This is an event where times tend to drop more than some other events at state, so be sure you're at the fence when the 300 meter hurdle gun goes off on May 16.

It is certainly a good start that nine throwers at 155 or better return this spring. The most consistent of that bunch may be the top two--Austin Williams and Max McDonald. The unfortunate thing there is that the two will likely never go head-to-head all season.

4A has a bundle of the top returners in Nick French, Scott Sipes, Conor Bertles, and Austin Brant. 5A adds Patrick Byerly and Adrian Brukner to McDonald. 3A checks in with Garrett Coalson.

The best potential for in-season matchups seems to be in the Colorado Springs and Loveland/Greeley areas.

26 guys return at 21 feet or better. I'm not going to make an effort to enumerate a list that long.

I will list those at 22 feet or better, however, and that list would include Ben Morgan, Riley Rowles-Birdsong, Trey Zupancic, and Austin Taylor. A hair's breadth away from 22 feet, and coming off a nice indoor season, is Austin Campbell.

So much of the long jump, though, comes down to who hits the big jump at a given meet. The battles in 5A, 4A, 3A, and 2A seem to be wide open affairs--only 1A has a clear and easily defined leader on the board. That should make for a very interesting spring, culminating in some great competition at the state meet.

Looking up and down the list of nominations, it's hard to argue with Jeff Bliven's assessment of how uniquely good the 800 is this spring.

Perhaps some big happens in another event and all that changes during the course of the season, but as a preseason favorite, the 800 ranks at the top of the list. If pressed to pick a second, I think I'd go with the 300 meter hurdles.